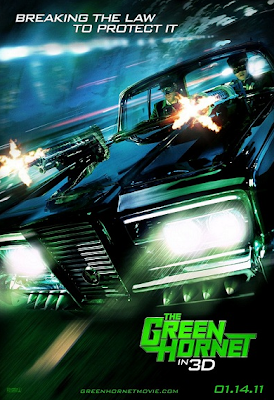 In the interest of full disclosure, let me say that I greatly enjoyed Alec Baldwin in THE SHADOW and saw THE PHANTOM twice! I still have a soft spot for Ron Ely's DOC SAVAGE, too! On the other hand, I truly hated almost everything about THE SPIRIT. Thus, when I was invited to go see THE GREEN HORNET and attended with a truly open mind, the first sentence that came to mind is one I never thought I'd say: THE SPIRIT was better.
Let me begin by saying that I can't see 3-D. Since this film was not available in a non-3-D version, I wore the glasses just in case but got not one effect. What I did see were some pretty heavy-handed attempts at having things fly directly at the camera, most obviously the closing credits.
THE GREEN HORNET opens well enough with a dark-humored sequence in which the Big Bad, Christoph Waltz (an Oscar winner last year), confronts and is confronted by an upstart gangster new in town. It's violent but well-played. I would love to have seen a film that pitted the Green Hornet against this guy. Unfortunately, throughout the rest of the picture, Waltz's character becomes more cartoonish as if to match the tone of the rest of the film.
And that's what this is from the get-go--a big, dumb violent cartoon. I thought Rogen could pull it off a la Michael Keaton as Batman but I left disappointed on that score. As co-writer and star, Rogen is one of the weakest points of a weak movie. The story is virtually non-existant. Playboy slacker Britt Reid's newspaper publisher father dies and he inherits the paper. One of dad's old servants designs cool cars and he and Britt get drunk and go out in disguise to cause mischief. They end up rescuing a young couple from a street gang instead and decide to do that from then on, pretending to be bad guys while helping people. This sets the real bad guys out to kill them which then accounts for the last half of the picture.
The obvious bromance between Rogen and Chou is hampered by the latter's lack of a grasp on the English language. This throws his timing in the comedy scenes and makes him occasionally incomprehensible in others. If Rogen ever really showed a sense that his character was growing, his performance might have worked. As it is, every step of the way, he plays the Hornet as a bumbling, stumbling doofus carried by Kato.
Cameron Diaz is the temporary secretary who is made permanent for no real reason and almost immediately is sitting in on staff meetings and offering her opinions. Her character is the least realistic of a pretty fanciful bunch. The only one to emerge with any sense of dignity is the staid Edward James Olmos as Axford, the character who, in the television version, was the comic relief!
The real breakout star of the film is The Black Beauty, the Green Hornet's car. Pimped out with guns, rockets, tire shredders and ejector seats, no matter how badly the film does--and based on the lack of audience members at the screening I saw, it WILL--that car will make a cool toy! Wait a few months and it'll be cheap. I think it's a safe bet we won't be seeing a sequel.
Verdict--THE GREEN HORNET: A few laughs, often at the expense of the heroes, some cool fun with the car...but little else.
Posted by Booksteve at 2:48 PM