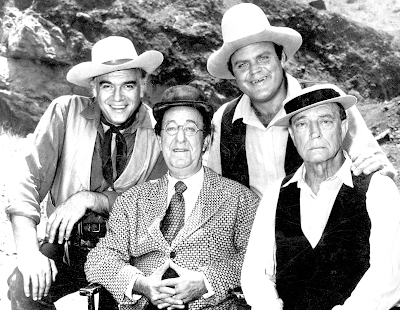 Mark Evanier and a few others ran this great pic a while back featuring Ed Wynn, Buster Keaton and two of the cast of BONANZA--Lorne Greene and Dan Blocker. On my BOOKSTEVE'S RARITIES site we find the source:
THE SCENE STEALERS (1965)
This hour-long television special stars Jimmy Durante, Buster Keaton and Ed Wynn who run around a television studio causing all sorts of mayhem while attempting to avoid a security guard. Along the way, they mess up filming of BONANZA and THIS IS YOUR LIFE to name a few. Guests featured in this special include Ralph Edwards, Dorothy Provine, David Janssen, Rosemary Clooney, Eartha Kitt, Bert Convy, Nanette Fabray, Lorne Greene, Dan Blocker, Jackie Cooper, James Garner, Jack Lemmon and many others!
Order your own copy at BOOKSTEVE'S RARITIES.
Posted by Booksteve at 6:33 PM