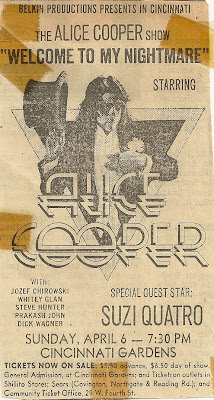 Over at my other place (A GEEK'S JOURNAL 1976) we're working our way through 1976 where I attend my very first real rock concert (following a pleasant Tony Orlando and Dawn event that I wouldn't exactly call a rock concert) in May. I almost attended my first concert a year earlier however...Alice Cooper's WELCOME TO MY NIGHTMARE tour in 1975!
I'll be honest, Alice scared me when I first saw him circa 1971. Was he a guy or a particularly unattractive girl? And what was up with that snake!!?? He had this loud song called EIGHTEEN on the radio and I just had never heard music quite like his. Then, later on, he came out with SCHOOL'S OUT, a clever little bit of musical anarchy. It was starting to make sense to me. With the release of his album, WELCOME TO MY NIGHTMARE, I got it! Alice Cooper music played into the fears of adolescents in a way that no one else did. Most groups played into teenage fantasies but Alice played into our collective nightmares with songs of angst, despair, worries about the future, worries about puberty, worries about the voices in our own heads.
It was kind of creepy but with this album and tour, he coalesced his character of a malevolent host a la Joel Grey in CABARET. On top of that, the person whose fears he was playing into with this concept album...was named STEVEN. I bought the album after some soul-searching and played it endlessly. My mother actually liked the album's double-entendre titled hit, ONLY WOMEN BLEED but I tried not to hold that against Alice.
At some point there was even an unprecedented late night shot on video TV special adapting the album. Not sure where that fit in timewise but in April of 1975 the tour came to Cincinnati and I wanted to go. I REALLY wanted to go. I had never been to a rock concert before and I was looking at this one more like a carnival thrill ride than a live show. I couldn't wait.
The problem was that the Riverfront Coliseum was not yet the home of all the rock concerts. Alice (and opening act Suzi Quatro, sort of an early Joan Jett 'til HAPPY DAYS softened her image) would be appearing way up in Cincinnati at a place called Cincinnati Gardens. We had gone there for DISNEY ON PARADE in 1972. Getting there was a complicated series of buses which ran less often as it got late. In '72, we ended up taking a cab home at substantial cost and didn't get in until well after midnight. When it came to the Alice Cooper concert, My parents wouldn't hear of it. Having just turned 16 and not knowing anyone else who wanted to go who could drive me...I passed.
The good part was that I probably slept well for months because of NOT seeing the show. In retrospect, however, it would have been great to say that I saw Alice Cooper at his peak and Suzi Quatro when she was still a punk as my very first concert.
Posted by Booksteve at 4:17 PM