Comics: Anatomy of a Mass Medium 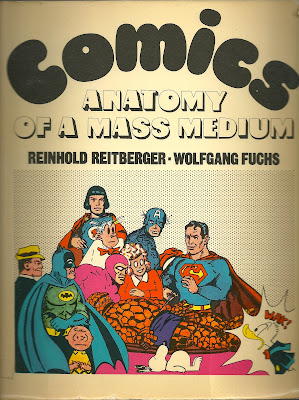 Only time today for another random book off the shelf. This one is COMICS: ANATOMY OF A MASS MEDIUM, the English translation of a semi-scholarly treatise on international comics history from 1972. Along with Steranko, Daniels, Feiffer, the Penguin book and the paperback of ALL IN COLOR FOR A DIME, this was one of my first comics history books (of which we now have a bookcase full and that's not counting most from the past decade that we couldn't afford).
Written by Reinhold Reitberger and Wolfgang Fuchs, for many years I considered this one an also-ran compared to the above-mentioned books. Perhaps it's due to the translation or perhaps to the attempt at telling such a wide-ranging story in approximately 250 over-written pages.
With hindsight, however, I note that this volume was the book that introduced me to a number of intriguing strips and artists I had never seen or heard of anywhere else. In fact, in some cases it was decades before I was able to see more of some of these.
These include:
ASTERIX--In 1975, my high school Spanish class had some ASTERIX volumes in Spanish and over time I was able to get the whole delightful set of the adventures of the little Gaul who remains an icon throughout Europe.
TINTIN--I had seen excerpts in a kids magazine in my grade school library but the art turned me off. Here I learned just how popular the series was. It was only in the 21st century that I finally started reading it.
LUCKY LUKE--Although I'm still not a huge fan of this French Western strip, I quite enjoyed the Terence Hill TV series from the '90's as well as the big-budget French western in 2010.
BERNARD PRINCE, LUC ORIENT and BRUNO BRAZIL--Three series of graphic novels with wonderful art and such good storytelling that one doesn't even need to know the language to enjoy them. I finally got a few only in recent years.
Jean Giraud (aka Moebius)--Already popular in Europe with his Blueberry westerns, it would be a few years before his popularity spread to the US.
DIABOLIK--The Italian anti-hero whose cinematic sixties feature directed by Mario Bava has long since become a favorite.
Guy Peellaert and Guido Crepax--Two European artists whose art I admire greatly even though I have never particularly cared for any of their specific comics works.
So, yes, it took me a while to realize it but this book, purchased in 1972 in the basement of Kidd's Bookstore on Vine Street in Cincinnati, ended up being, if anything, perhaps more important than some of the others!
Posted by Booksteve at 8:38 PM