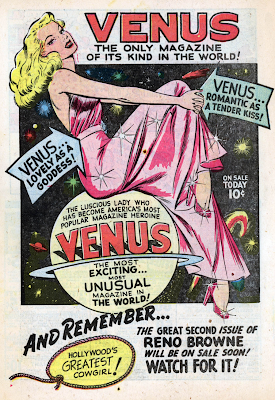 Here's a nifty Atlas ad from the 1950's for VENUS. The character was Bill Everett's baby but this art doesn't seem to be by him. In fact, it looks like Atlas was attempting to push Venus to girl readers as something other than" just" a comic book...and, of course, promote RENO BROWNE while doing so!
Posted by Booksteve at 7:34 AM