Movies That Fell Through the Cracks # 65 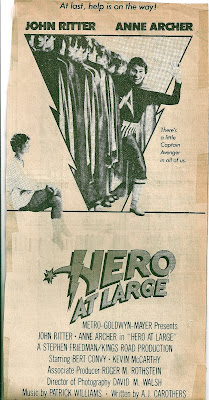 John Ritter had become one of the few male TV superstars of the late seventies with his role in the seminal T&A sitcom THREE'S COMPANY. Based on a UK comedy entitled MAN ABOUT THE HOUSE, it was an old-fashioned broad, leering sex farce done up in modern dress. The fact that Ritter stood out even opposite the mostly braless sex bomb Suzanne Somers should give some idea of his charm.
The son of classic showbiz singing cowboy Tex Ritter, John had shown himself to be quite a good and charismatic performer in a running role on his father's favorite TV series, THE WALTONS, as well as quite a few guest appearances. Like most TV stars, though, he wanted to be a movie star.
HERO AT LARGE was the first starring vehicle intended to make Ritter big box office...and it should have worked. Toning it down a bit from his TV character, John plays a small-time actor who accidentally saves someone while in costume to promote someone else's movie. Afterwards, he decides to keep trying to be a real-life superhero. Real life not being a comic book or movie, however he finds himself with all kinds of issues that ultimately tarnish his reputation until he literally finds himself in a situation where he HAS to prove himself one more time.
Written by veteran Disney and family sitcom scripter AJ Carothers, HERO AT LARGE is a nice mix of light romantic comedy, heroic fantasy and just a touch of heavier drama. Opposite the lovely Anne Archer, Ritter's onscreen charm goes a long way toward making the unbelievable story believable. Around here, at least, the picture didn't even open in the major houses, premiering instead in second string neighborhood theaters to sparse audiences. John Ritter returned to his day job and in spite of a long and impressive career that ended far too soon, he never did become a real movie star.
Posted by Booksteve at 3:27 PM