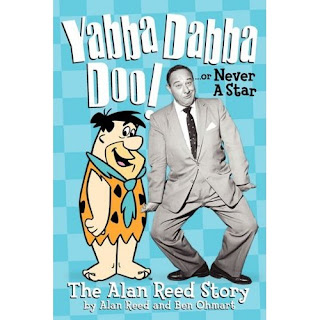 First of all thanks to publisher Ben Ohmart for setting me up with a few review copies of relatively recent releases from Bear Manor Media.
YABBA DABBA DOO!...OR NEVER A STAR is a book that I had been wanting to read for some time and I was certainly not disappointed. This is...or would have been...the autobiography of Alan Reed who, in spite of the title, was most certainly one of my favorite stars growing up in the sixties and seventies. Reed sat down to tell his tale in the last few years of his life but work and then illness interfered and it was never finished. As co-author, Ben Ohmart has taken the finished chapters and notes, filled in the empty spaces and then even added in additional info from Reed's family as well as long lists of the actor's many radio, TV and film appearances.
Alan Reed, as I knew even from a young age, was, of course, the voice of Fred Flintstone. As such he created---in spite of the cartoon's HONEYMOONERS influence--one of the great, original TV characters of all time. I used to love picking out his voice on other cartoons or spotting him in occasional live action roles as in a Penguin episode of BATMAN. As I got into old time radio, I began to discover what a tremendous career he had had there long before he ever hit Bedrock.
Now there's a voice to that history--and what a voice. Reed begins his tale in the warm and engaging voice of a man who's been through a lot and still enjoys life. The early chapters were mostly completed prior to his death in the mid-seventies and read more than a bit like the narration of a somewhat Dickensian novel. We follow the usual career path of young lad going into theatre against his family's wishes, then ending up on radio, then moving to Hollywood.
We meet real world larger than life characters such as Col. Lemuel Q Stoopnagle and Fred Allen and follow his ever-building success, culminating perhaps in his role as Falstaff Openshaw in the Allen's Alley sketches or his own stated favorite as the co-star of J. Carroll Naish's LIFE WITH LUIGI.
When radio dries up his career does the same until finally he is brought in as a replacement for the originally cast voice of Fred on THE FLINTSTONES and comes up with one of THE great TV catchphrases in "Yabba Dabba Doo!"
Some of Reed's portions of the book consist frustratingly of only introductory bits and notes for chapters never completed, hinting at private anecdotes that Ohmart was unable to fill in. The book's posthumous co-author does an excellent job at filling in the facts however, even up to the point of Reed's final role in THE SENIORS, a low-budget T & A comedy.
The whole book is structured so one can easily tell which parts are in Reed's own voice. There's a nice selection of photos that seem to show Reed looking younger and happier as success finally catches up with him. Photos of a thinner, bearded Reed from the seventies look almost like a different man than those of the working radio actor of thirty years earlier.
In fact, the only problem with YABBA DABBA DOO! is the parts that are missing because they were never written. I was very pleased to find what a likable man Alan Reed was and would have loved to have heard him tell more of his marvelous memories and stories in his own, inimitable style. If you were ever a fan of radio or the Flintstones, buy this book and meet the real Alan Reed!
Posted by Booksteve at 7:29 PM