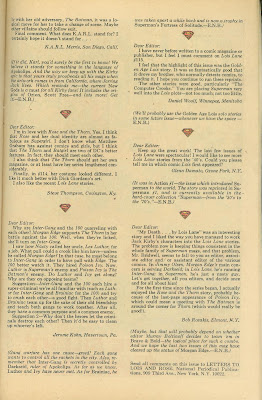 Longtime readers may recall that my very first time in print ever was in the letter column of a 1968 issue of ADVENTURE COMICS. Just rediscovered and seen here is my SECOND appearance in print, some four years later, from LOIS LANE # 119. Interesting to note I share the page with future DC AnswerMan Bob Rozakis, now one of my friends on Facebook!
Oddly enough, my infatuation with ROSE & THE THORN didn't really last long.
Oh, and belated apologies to Matt Graham (wherever he may be) as he was, in fact, a prolific letter writer during this period who often had some good insights and interesting opinions.
Posted by Booksteve at 9:40 AM