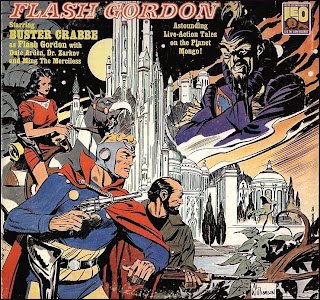 Yesterday I was at the Public Library and I noted the bizarre irony that the once considered reprehensible, ban-worthy EC Comics stories were now available quite literally next to Shakespeare in the teen section in their recent archived editions. They had SHOCK SUSPENSTORIES and WEIRD SCIENCE. I picked up the latter and became immediately captivated--as always happens--by the work of Al Williamson.
I first became aware of Williamson during a period when he wasn't doing comic books anymore. It was through the fanzine RBCC whose issues featured a regular page/column entitled THE WILLIAMSON COLLECTOR. I may not have known his work but I knew he must be something special to be singled out thusly. Then, as I got more and more into fandom, I grew to discover his work on the King FLASH GORDON comics, the SECRET AGENT CORRIGAN newspaper strip and eventually his glorious 1950's work for EC's sci-fi comics.
In recent years, I taught son bookdave what to look for in certain artists' work; with Williamson one of the main things was the spots. Willie always had something with spots--alien mushrooms, a dinosaur, the gown of a princess. Williamson also liked to have heroes that quite frankly looked like Al Williamson...and that was not a bad thing. They often wore what I called the Williamson jacket--a light, solid-colored windbreaker, usually unzipped and looking so cool...even if worn in inappropriate climates. The other thing to watch for with Al was lovely, fragile looking ornate cityscapes in splash panels, often added by friend and fellow artist Roy Krenkel back in the old days. My son has become a big fan of Al Williamson through our home library of the Russ Cochran box sets.
In later years, as the newspaper strip market dried up, Williamson returned to comics but, with rare exception, usually as an inker. At Marvel he did a long 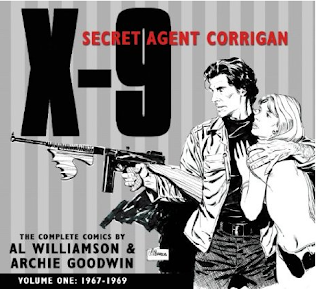 run on DAREDEVIL, lending an air of solid authority to the work of various pencillers. More recently he worked on a lovely SUB-MARINER piece in last year's 75th Anniversary special from Marvel.
His work has been celebrated in books beginning with THE ART OF AL WILLIAMSON back in the late seventies and going through more recent collections by Greg Theakston and others as well as AL WILLIAMSON'S FLASH GORDON, gathering together all of Al's various portrayals of what, to him, was the quintessential adven
ture character. Still to come is the soon to be released first volume of THE COMPLETE SECRET AGENT CORRIGAN by Archie Goodwin and Al Williamson, who teamed up again years later on the STAR WARS comic strip. It should come as no surprise to hear that George Lucas admitted to having been himself inspired by Al Williamson. Whether we knew it or not, I think we all were.
Al Williamson died on Saturday evening. Thanks for everything, Mr. Williamson. Rest well. Say "hi" to Fritz!
UPDATE: A message from
Mrs. Al (Cori) Williamson: The family requests that, in lieu of flowers, a donation in Al's memory be made to either:
The Joe Kubert School
37 Myrtle Avenue Dover, NJ 07801 Attn: Al Williamson Scholarship Fund
or
Yesteryears Day Program 2801 Wayne Street Endwell, NY 13760