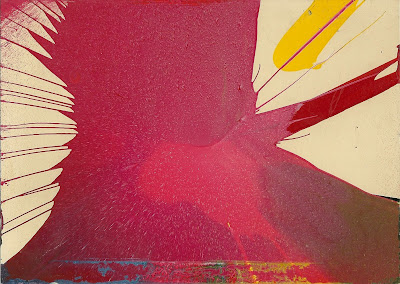 Here's a piece of art I made at Cincinnati's Coney Island in roughly 1969 on one of their "spin art" machines. Basically, you added paint and pressed a button that would cause your canvas to spin and spread the colors in a way Jackson Pollock would have enjoyed. I did it several times but this is the only one I still have. I called it "Solar Flare." Looking at it now I might well have called it "Phoenix Rising."
They still make those types of machines! Here's a link to very similar ones.
http://spinartusa.com/store/single.html
Posted by Booksteve at 1:32 PM