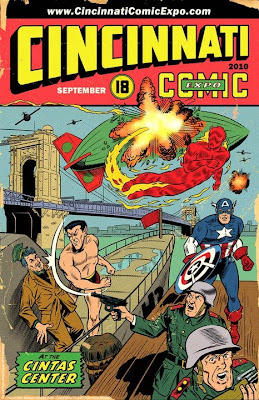 It was exciting earlier this year when WizardWorld bought the rights to handle a big Cincinnati Comic Book Con but if there has been any movement whatsoever beyond that, they seem to be keeping it to themselves. Seems unlikely to me that they would even have enough time to pull one off at this point.

In the meantime, however, in stepped the folks behind the Cincinnati Comic EXPO! I'll share more details as things get closer or if you're on FACEBOOK, look 'em up but for now, take delight in their just released poster!

Drawn especially for the Expo by Golden Age artist Allen Bellman who worked for Timely as well as several other companies, often on crime titles, here we have the Invaders--The Human Torch, Sub-Mariner and Captain America, Timely's Big Three!--fighting Nazis in the shadow of Cincinnati's Roebling Suspension Bridge. The bridge, connecting Cincy to my own Northern Kentucky, has been there since the Civil War (the US one, not the Marvel one) and is one of the most obvious and recognizable landmarks in the city. Note, however, that although they are rather obviously Nazis, there is no sign of a swastika. With the area's reputation for closed-mindedness leading to the sadly appropriate nickname, "Censornazi," perhaps that was a good choice.
Posted by Booksteve at 8:30 PM