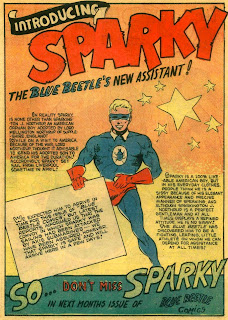 Okay, in all of my years of digging through old comics and the histories of old comics, I really don't believe that I had ever heard of Sparkington J. Northrup AKA "Sparky," the Blue Beetle's early 1940's s sidekick! In fact, although he was cover-featured on this particular issue, Sparky didn't even actually appear other than in the one page introduction/apology seen here. When he did show up next issue, it was as if he had been there all along. No origin story. Hey, DC, how about having an elderly Sparkington J. Nothrup need to turn to the current Blue Beetle for help on some problem? Or has poor Sparky been retconned permanently out of existence?
We'll try to run a Blue Beetle and Sparky story soon at our companion blog, FOUR-COLOR SHADOWS.
Posted by Booksteve at 8:20 PM