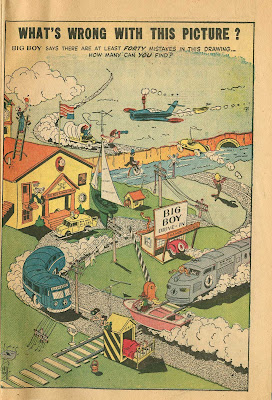 I stopped in a Big Boy restaurant with a friend last week and even at my age found myself lamenting the fact that they no longer have THE ADVENTURES OF BIG BOY comic books! They were silly little things really and featured the type of puzzles one now finds on the kids' menus instead. The problem is that the menus don't have adventure comics, too!
The Big Boy restaurant comics were usually packaged by different comics at different times including, in the beginning, Timely comics and later on Craig Yoe's design studio. Stan the Man reportedly wrote the earliest issues and Sub-Mariner creator Bill Everett (subject of a soon to be released book by Blake Bell) signed the first issue art including the puzzle page seen above. Over the years, many other well-known creators worked on the series including, in the 1990's, Steve Ditko!
Here's a link to the rest of that first mid-fifties issue online.
http://www.animationarchive.org/2008/01/comics-big-boy-and-power-of-licensing.html
Posted by Booksteve at 11:27 PM