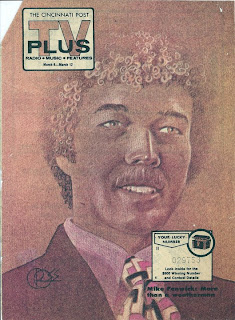 I've decided that one of my all-time favorite signatures for a comic book artist is that of Daerick Gross. Gross has kicked around the industry for some years but is probably best known for his work on the Anne Rice vampire novel adaptations and subsequent graphic novel. In my opinion, he SHOULD be best known for his Latina character MURCIELAGA, THE SHE BAT, a character who has been around off and on for two decades nearly, even though I am sad to say I only recently discovered her.
As I've written before here, I first discovered Mr. Gross and his work way back in the 1970's when he worked for the CINCINNATI POST as an all-around staff artist. Here we have what I believe to be the last of the pieces of his work I saved from that period. Seen in this TV magazine cover portrait is Mike Fenwick, a popular local weatherman of the Nick Clooney regime at WKRC-TV (Tall 12!). I looked up Mister Fenwick to see whatever happened to him and was sad to see that, while he went on to be an anchorman himself, he passed from cancer just a couple of years back.
Posted by Booksteve at 1:22 PM