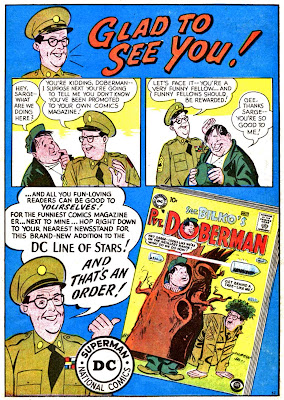 In the late 1950's there were few characters on TV bigger than SGT BILKO as played by the inimitable--or should that be VERY imitable--Phil Silvers! Even I imitated Phil Silvers once in an Old Time Radio commercial re-creation! Anyway, in an early instance of the type of situation which found a show's popular star often overshadowed by a secondary player (Fonzie, Urkel, Dr. Smith, etc.) Pvt. Duane Doberman became something of a TV sensation. It also is said to have vastly inflated the ego of actor Maurice Gosfield who played the role. Anyway, National comics put out a BILKO comic during the peak of the series' popularity so it was only natural that they might put out a companion comic featuring the hapless but lovable Doberman. Here are a couple of house ads for one of the eleven issues that the series ran. 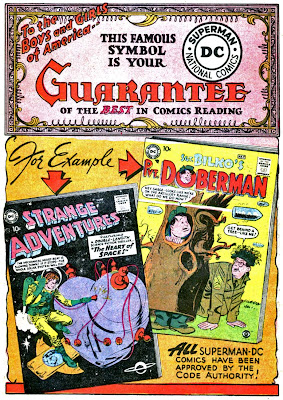