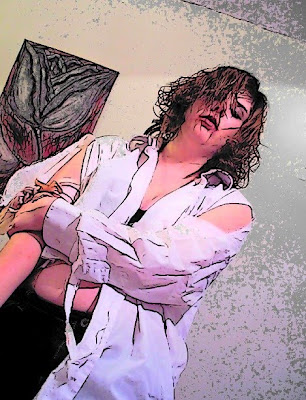 Back in January, Brittany Rose and I collaborated on an ambitious attempt at a theme photo shoot based around an abused woman's vengeance on her attacker. It was a surprisingly fun shoot when one considers the subject matter. Afterwards, I took the more than 200 photos we took that day and started piecing them together into a comic book-like form using various programs on my PC. That would be the PC that died at the beginning of February before the project was very far along, leaving me thinking for a month that I had lost every single one of those pictures. Well, to be fair, about halfway through the month it occurred to me I had given BR a disk with all of the originals. Whew! Still, the work I had done on them had been lost, as had the programs I had done it with!
Now that it's all back, the moment seems passed and the project left unfinished. Today over at BRITTANY ROSE & ME, however, I run a handful of shots from various stages of the aborted production. Yes, yes....the glasses. I know, I know...we did some shots with and some without the glasses. Still, I think it's some of my best work so if you haven't checked out Brittany Rose lately, check her today at http://brittanyrosepictures.blogspot.com/2010/03/abuse.html to see a never before seen side of my wonderful muse!
Posted by Booksteve at 7:59 PM