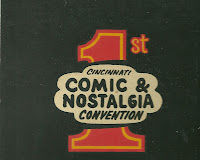 Funny how memory plays tricks on you isn’t it? Even a spooky memory like mine. I’ve written here before about some of the earliest comic books conventions I attended and I was convinced that what I said was correct. Turns out it was close! I just ran across a list I made with basic info about these early Cons…as they happened!! From early 1975 through late 1977 I attended 9 comic book conventions and here they are! Again, some (not all) of this info contradicts previously published reports on this site but I have every reason to believe that THIS is the accurate info this time!

1-I had been reading about Cons for a few years by the time Cincinnati got one of its own in January of 1975. That was, as I remembered, THE 1ST ANNUAL CINCINNATI COMIC CONVENTION. Sponsored by Cy and Andy Voris of the lo

ng gone Yellow Kid Comics Shoppe. It was held at the venerable Netherland Hilton in downtown Cincy and cost a buck and a quarter to get in. I spent $28. I recalled before the guests I saw there but I was incorrect. See # 4.

2-THE MID-AMERICA COMIC CONVENTION was sponsored by the owners of Northern Kentucky’s only comic book shop, The Northern Kentucky Bookstore. It debuted on a cold March day still in 1975 at a Holiday Inn within waking distance of my house so I walked. It was a two day con with an extra-large dealers room and movies but no guests. Cost to get in--$2.00. I went both days.

s! Sponsored by Vladimir Swyrinsky, this was my first real Con! I saw or met lots of celebs including Cleveland area resident Tony Isabella who would,

in the Internet age, actually become a friend! It rained torrentially the whole weekend! Admission was $4.00 a day and I spent $75. I also got to enjoy watching STAR TREK on a giant screen in a room full of Trekkies for the first time and saw the closed circuit TV debut of SPACE: 1999.

4-THE 2ND ANNUAL CINCINNATI COMIC CONVENTION was back at the Netherland Hilton in January of 1976! I believe I wrote previously that there WAS no 2nd Annual one! In my mind, somehow I mixed the two together. Easy enough, I suppose, as this one was al

so sponsored by the same folks, at the same hotel, for the same price. The difference was that this one had some good guests including Frank Brunner (whom I never saw once somehow) and super-hot writer Steve Gerber as well as Mary Skrenes (the latter two then doing OMEGA THE UNKNOWN for Marvel) and fan-turned-pro Marty “Pesky” Pasko. Th

em I saw. The guests were in this intimate little room with just room for a small handful of folks and I managed to be one. Much of the talk was about the then topical concept of unions for comic book artists. Again, I spent about 75 bucks.

5-A couple of months later in April, THE MID-AMERICA COMIC CONVENTION II was held at a new venue at a Holiday Inn North of Cincinnati. I had to take a bus and then a cab to get there. There was very little publicity this time and a small dealers room where I spent only 30 bucks again. The sponsor was again the Northern Kentucky Bookstore, which soon afterwards went out of business. Admission for each of two days was a buck. I only went on Saturday, as it was so hard to get to in the first place.

6-OMNICON was next in July! The biggest yet! This was the nigh-legendary con in Louisville co-sponsored by super fan Don Rosa (yes, THAT Don Rosa!). It was July of the Bicentennial year and once again my parents and I bussed it, this time for all three days. Admission was $7.00. I spent $60. It said Louisville but in actuality it was outside of town at the Convention Center Ramada Inn (very near where I would spend a week in training 20 years later when working at Waldenbooks!). I think Frank Brunner was there, also. I know he did the Con book cover. I also know that if he WAS there, I missed him again. I was wearing my blue, short-sleeved STAR TREK shirt when I met DeForrest Kelly, though--the first of many STAR TREK actors I would meet over the years. I stood next 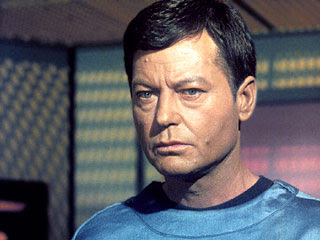 to him while a local TV news program interviewed him. That evening at the hotel, I watched the interview on the news with my parents. Many years in the future, I discovered that my Trekkie wife had also been at OMNICON but we had not yet been fated to meet.

7-THE COLUMBUS COMIC BOOK CONVENTION is one that I would have sworn took place a few years later and that’s what I said when I wrote about it later. I took my first ever Greyhound trip to get to it in downtown Columbus, Ohio, a few blocks away from the bus station. This is where I met Jim Steranko and Bob Layton and Mike Nasser who, three decades later, would become a close friend through the Internet as Michael Netzer. I only spent thirty again, though, and had read everything I got by the time I got home that evening after my second two hour bus ride of the day!

8-In the summer of 1977, I attended the biggest comic book convention of its day. That year Con pioneer 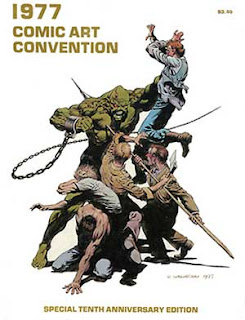 Phil Seuling was forced by circumstance (a political convention if I recall correctly) to hold his annual Fourth of July NYC show out of town. Thus, I attended the 10TH ANNUAL NEW YORK COMIC ART CONVENTION…but it was in Philadelphia! Once again, I talked my parents into a long Greyhound trip to the Philly Sheraton. Not sure what they did the whole time but I spent three days roaming the Con floors where I saw Barry Windsor-Smith, Frank Thorne (now a Facebook friend, also), Seuling himself and a large number of other big name comics creators that at that time I did not recognize. John Stanley and Berni Wrightson were the guests of honor. At that point I didn’t care about Stanley (now a favorite) and it would be 32 more years before I’d actually see Berni(e) and that was at last year’s Mid-Ohio Con. Frank Brunner was probably there, also! In my memory, the highlight was finding an entire room full of paintings from Jeff (now Catherine) Jones. All of that beautiful work that was later published in THE STUDIO and THE ART OF JEFFREY JONES was even better in its original form! Catherine would also become a friend in recent times and, in fact, quotes me on her website! Tickets for this one were a whopping ten bucks and for the first time I spent more than one hundred dollars.

9-The last comic book convention I attended in my eighteenth year was rather anti-climactic (as anything might be after the previous one). As with the earlier Columbus show, I too a solo Greyound trip to Dayton, Ohio, only an hour away, for THE DAYTON COMIC BOOK CONVENTION. Sponsored by downtown Dayton’s Dragon’s Lair, this was at the Convention Center and had received TV coverage even as far south as Cincinnati. Admission was a dollar and I was back to spending only around thirty, this time mostly on newer stuff.