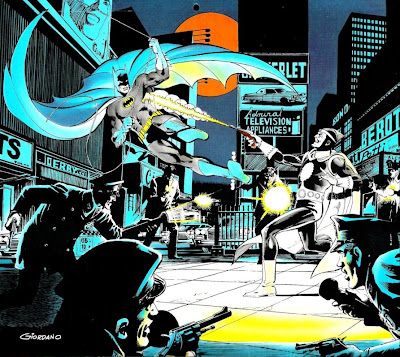 I never met Dick Giordano but I walked past him at a Con one time about two decades back. I was so in awe that it was still a memorable moment. Last week, word filtered onto the Net that Mr. Giordano was not doing well and now word comes that he has left us. 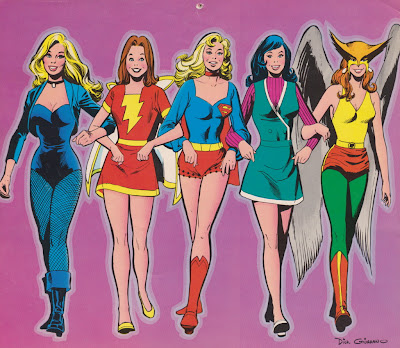 I first became aware of Dick Giordano when he became a DC editor in the mid-sixties. Dick was actually kind enough to introduce himself to the fans in a little half page yellow box so I actually knew his name before I knew other DC editors who preferred to sign the generic "Editor" to their letters pages (which were probably not really written by them at all). Giordano had a hands on approach and he brought with him from Charlton a number of creators who would go on to remake the industry at the time...most notably perhaps, Jim Aparo.
At Charlton, Dick had started out as a rather staid penciller back in the 1950's, his best known title being SARGE STEEL, about a cop/spy with a steel hand (whom he revived a number of times at DC years later). Over the years, though, he drew everything and drew it well. By the 1960's he had taken over the editorship of Charlton's attempt at jumping on the Batmania/superhero revival bandwagon and thus shepherded Steve Ditko's revived CAPTAIN ATOM, BLUE BEETLE, QUESTION and the other characters who would one day lead to Alan Moore's WATCHMEN.
At some fortuitous point, Dick returned to the art table while at DC and teamed with sixties wunderkind Neal Adams for a memorable series of BATMAN stories. The pair would work together many times for many publishers as well as at their own Continuity Associates.
But Dick did not relegate himself to inking. He pencilled many memorable stories himself and his own BATMAN became a favorite. He also did the legendary unfinished (until decades later!) DRACULA adaptation with Roy Thomas at Marvel.
After technically retiring, Dick would keep his brushes wet with a little work from time to time working on THE PHANTOM and making guest appearances as a revered veteran working on various international titles.
Dick Giordano drew a unique type of comic book realism. His superhero women were not the supercute, overly busty fanboy favorites. He didn't draw girls--he drew adults. He drew women who looked like women and looked genuinely heroic. He drew city scenes that looked more like real cities than anyone since Will Eisner (with the possible exception of the late Marshall Rogers). He drew a BATMAN who was a sane grown-up who would save me if I needed saving and do so for all the right reasons. He drew MY BATMAN.
Thank you, Mr. Giordano. I should have said it to you at that Con twenty years ago. Thank you so much.
Rest in Peace.
Posted by Booksteve at 2:04 PM