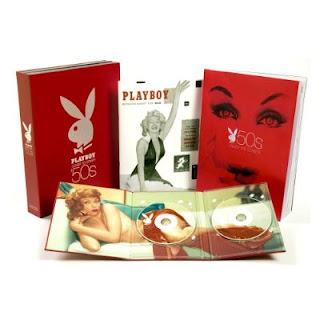 Took a bunch of old video game manuals to the local Half-Price Books yesterday to sell so we had a little money to work with. We also had a 50 % off one item coupon. Rene picked up some opera CD’s. David got an Artemis Fowl book. Bree took my recommendation on my all-time favorite book—FAHRENHEIT 451.

Me? I picked up LENNON & McCARTNEY TOGETHER ALONE, a look at the solo years of the most successful songwriting team of all time (even though technically most of their Beatles-era songs were written solo anyway). I also got Angela Bowie’s 1993 memoir which jumped right out at me and seemed highly appropriate as Ziggy Stardust’s ex actually friended me on Facebook earlier in the day yesterday!

Most interesting, though, was the box set of PLAYBOY-THE 50’S. Originally $100.00, marked down to $50.00 and I had the aforementioned 50% off coupon! Very similar to the ROLLING STONE set I purchased a few years ago (which didn’t work for me until I got my MAC!), the set comes with a commemorative history book on Hef and his creation of the seminal mainstream men’s magazine. Even more fun is a facsimile reprint of the original first issue with the Marilyn Monroe centerfold. I haven’t checked but hopefully there’s SOMETHING about this magazine that shows it’s NOT the original or else I’m sure these are all going to end up on EBay!

The CD offers what the box called “the First Decade” of issues. Badly worded, there. Since the mag started at the end of 1953 and the collection here only goes to the end of 1959, these are, in fact, all the issues from the first decade in which the mag was published but hardly a decade of issues!

This was, of course, the era when you really COULD say you read PLAYBOY for the articles as much as anything else. With the easily searchable database, I’ve already discovered nice articles about Tom Lehrer, Steve Allen, Brother Theodore and Harvey Kurtzman! All of the great Jack Cole’s cartoons are here as well as lots of silly grown-up stuff by future children’s book author Shel Silverstein. There’s even the original, serialized version of Bradbury’s FAHRENHEIT 451! Lots more from Ray, also, along with TWILIGHT ZONE authors Richard Matheson and Charles Beaumont as well as many others I haven’t gotten to, yet.

As for the girls, that’s the funny part! Looking at these early issues now, one finds it hard to believe they were so controversial in their day. It’s like looking at the Beatles on THE ED SULLIVAN SHOW and saying, “What long hair?”

In any given issue there are only a handful of naughty pics and then not nearly as naughty as many of today’s cable shows such as TRUE BLOOD or SECRET DIARY OF A CALL GIRL. There’s some famous faces including Bettie Page and Tina Louise and some lovely pinup shots but frankly I found the ads more fun!

Tons of ads for what Hef perceived as the PLAYBOY ideal man’s desires—jazz music, tobacco, alcohol, colognes, hats, socks, ties, etc. Lots of writing from him also on his original “Playboy Philosophy.” All in all as much of an enjoyable history lesson as the previously mentioned ROLLING STONE set was about the next generation. Love him or hate him as the aged cartoon character he has become in recent years, Hugh Hefner made an important difference in the 20th Century and that’s more than most people can say.