Laurel and Hardy in Movie Comics-1939 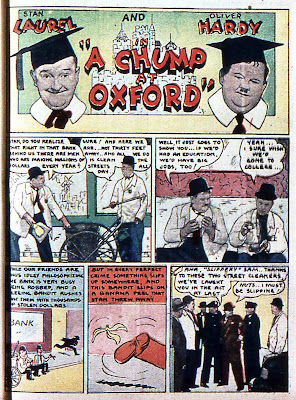 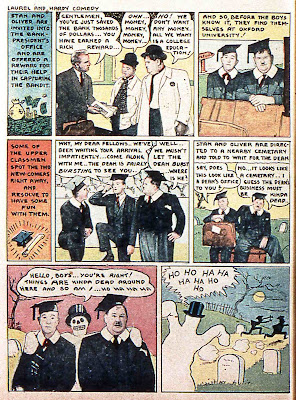 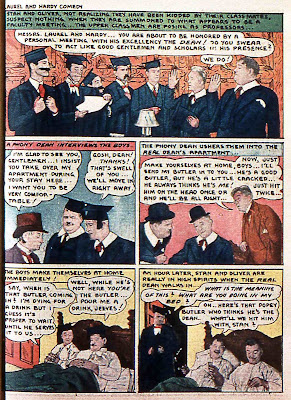 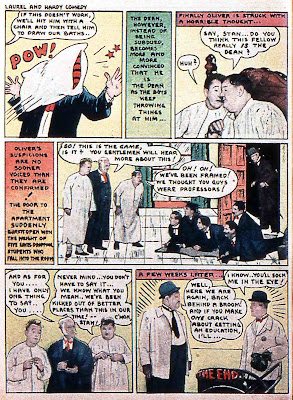 Here we have something amazingly odd. MOVIE COMICS was a Max Gaines/Sheldon Mayer comic from the late 1930's and as such a precursor to their All-American line that co-existed with National/DC in the early 1940's. It was unusual in that every issue presented a number of comic book adaptations of then-new films...well...kinda. The tag line promised, "a complete movie show for ten cents!" What they seem to have done is taken a handful of stills from the films they were doing, colorized them and had artists (Mayer possibly? He does the spot illos for the text pages) add backgrounds and often crudely lettered word balloons. As most of the stories only lasted a few pages, any real semblance of plot pretty much went by the wayside. In the case of Laurel and Hardy, here represented in what may be their very first American comic appearance, the subtlety and slapstick genius and reciprocal destruction timing are all lost.
A CHUMP AT OXFORD is hardly the boys' worst film but hardly their best either. In fact, one of its main claims to fame (well, if not fame, at least trivia) is that it was the third film ever for a young British actor in Hollywood named Peter Cushing--twenty years before Van Helsing and nearly forty before STAR WARS. He's even seen in the panel where the students are dressed as the faculty to prank Stan and Ollie. Very, very little of the charm and genius of L&H comes through because of the MOVIE COMICS novelty format and what passes for the film's meager plot is mostly told in captions. In fact, I would have to say that the title worked best as a publicity rag for upcoming films...which may be how the publisher managed to get access to the stills and apparently the scripts! Quid Pro Quo.
Oh, and while the title is correct on the above splash, the contents page of MOVIE COMICS # 6 lists the story as "The Chumps at Oxford!"
Posted by Booksteve at 7:07 PM