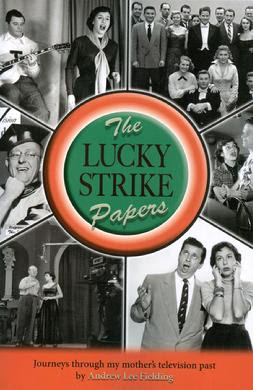 This is a review that WOULD have been published a month ago if not for the PC issues around here but now it's even more timely because I can plug the appearance Monday evening of author Andrew Fielding on RADIO ONCE MORE's live Netcast. 9 PM Eastern. Go here to listen in and participate tomorrow evening: http://www.radiooncemore.com/
THE LUCKY STRIKE PAPERS is an interesting but frustrating book. It is described by the author as "journeys through my mother's television past" and in a way, that's exactly what it is. The problem is that I'd rather expected to learn more about Fielding's mother than I do instead of simply about her era. That's what makes this frustrating. We are introduced to Sue Bennett, young up and coming singer in the Golden Age of Television, but then we learn more about her environment and people she worked with than her actual life, career or personal TV experiences. There are plenty of choice anecdotes about live TV but I couldn't lose the feeling that part of the story was missing.
In the end, though, the reader is finally given a bit more of what I expected with a nice chapter about Sue and what happened to her singing career. It just felt like t would have been better if her story was integrated more into the stories of early television.
The bulk of the book deals with various series on which Sue Bennett was a regular in the 1950's. Covered in particular are YOUR HIT PARADE (sponsored by Lucky Strike Tobacco, thus giving the book its title), bandleader Kay Kyser's COLLEGE OF MUSICAL KNOWLEDGE and THE FREDDY MARTIN SHOW. A number of folks from these shows were sought out and interviewed by author Fielding but the interviews--while fascinating--were more general than one might expect in a book ostensibly about his mother.
My favorite parts were about Kay Kyser, a uniquely amusing Southern bandleader popular in the forties with a humorous band that included vocalists Ginny Simms, Harry Babbitt and the comic Ish Kabibble. He and his band even starred in a number of movies before moving into television. Kyser, himself, would eventually turn his back on the industry that made him a household word on radio. The book details how he spent the rest of his life rising in the ranks of the Christian Science movement and politely refusing all show biz related inquiries. (He DID appear once on the DINAH SHORE SHOW in the late seventies or early eighties, though).
Dorothy Collins and Snooky Lanson (a charismatic singer I remembered from the brief 1970's revival) are fun to read about in the coverage of the amazingly popular music show, YOUR HIT PARADE. Bandleader Freddy Martin is interviewed, also. His band (and show) begat Merv Griffin, an always interesting interviewer and interviewee, with whom Fielding also spoke before his death.
Ultimately, while I was enjoying the book even as I found myself wanting more, I slowly came to realize the truth of a statement made by the author toward the end of the book--"...incompleteness, in part, defines a journey through a past one did not know firsthand." Suddenly, it made more sense.
THE LUCKY STRIKE PAPERS is not ABOUT Sue Bennett nor was it ever meant to be. It is, in fact, a very personal and entertainingly unique effort by Andrew Fielding to understand things about his mother and a public persona which was part of a world that no longer existed in his lifetime. All that living history about early television, as important and intriguing as it is to us pop culture buffs, is also incidental to the real story. And it's an admirable one that I'm glad I read!
Again, tune in to hear Andrew Fielding discuss the THE LUCKY STRIKE PAPERS with Neal Ellis and Ken Stockinger on RADIO ONE MORE on Monday night at 9, Eastern. In fact, tune it in whilst you surf the Net for great nostalgia programming 24 hours a day.
http://www.radiooncemore.com/
Order your own copy of THE LUCKY STRIKE PAPERS here: http://www.amazon.com/Lucky-Strike-Papers-Andrew-Fielding/dp/159393128X/ref=sr_1_1?ie=UTF8&s=books&qid=1268020917&sr=8-1
Posted by Booksteve at 10:58 PM