Song of the South Ad 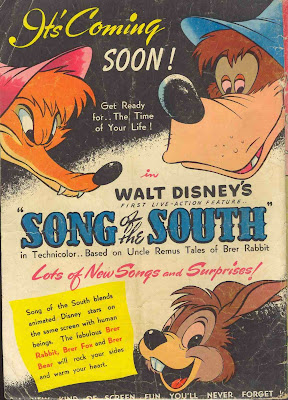 SONG OF THE SOUTH was, in spite of its classic animated sequences, technically Disney's first live action feature. It's not a great film but hardly deserving of the racial crucifixion it's received since the 1970's when it was withdrawn from the re-release cycle. The film tells the story of Uncle Remus who, in turn, spins magical parables about B'rer Rabbit, B'rer Fox and B'rer Bear for cute little Bobby Driscoll (later the voice of PETER PAN and still later a tragic former child star statistic) and his friend. That is actually the subplot as the main story is a dull post Civil War saga. The film is available pretty much all over the world so those who want to can find it but in this country, despite frequent rumors to the contrary, Disney has NOT ever released it on VHS or DVD and has no plans to do so at this time. After getting a Japanese VHS about twenty years ago, I asked every person of color I knew how they felt about it over the next week and nearly every one said they'd buy it in a minute if they could find it. One offered to get me a blank tape if I could dub it off for them and one young woman I'd known for ages started singing, "Zip-A-Dee-Doo-Dah!" Disney, Disney, Disney...you're sitting on a small gold mine but you're too afraid of a few misinformed people who THINK this film is sight unseen racist (It isn't any more so than GONE WITH THE WIND or any number of Reconstruction-era oaters) Surely you could cover yourselves with one of Leonard Maltin's patented apologies?
Posted by Booksteve at 5:08 PM