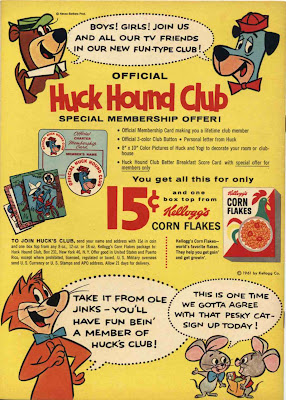 I was two in 1961 and my world pretty much revolved around Hanna-Barbera for much of that and several subsequent years. I was too young to really care about this club, however but I do recall the cereal box ads for it at the breakfast table.
What the deal is with the word balloons here I don't know. It's long been accepted that segmented balloons such as these denote whispering and I really doubt that's what they were trying to get across.
Note also how Yogi Bear is featured as prominently as Huck and, in fact, they refer to the club as "our" club. Originally a back-up star on THE HUCKELBERRY HOUND SHOW, Yogi's popularity eventually eclipsed the blue dog's and he ended up with his own show, his own cereal and tons of his own merchandising!
Posted by Booksteve at 1:24 PM