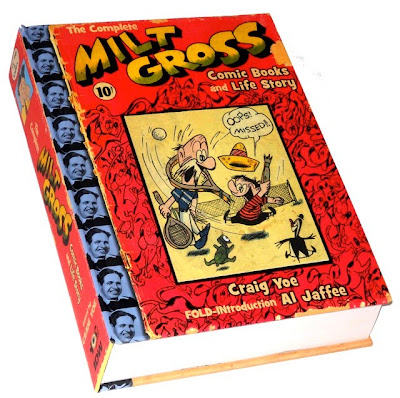 Here's one of the books that I worked on a little behind the scenes this past year, now available. I was only minimally familiar with Milt Gross before this book and now he's a favorite! Since I worked on it, I'm not going to review it but instead just share IDW's press release from last week:


San Diego, CA (March 10, 2010) - "Milt Gross is 'one of the best things to ever happen to comic strips,' proclaims comics historian Bill Blackbeard." With his most recent book, famed creator Craig Yoe (Secret Identity) and IDW Publishing prove just that. The Complete Milt Gross Comic Books and Life Story, which Yoe meticulously compiled from original art, rare and vintage comics, research and interviews, offers fans unique insight into this historic creator, topped off with an introduction by Gross's son, Herb, and a FOLD-INtroduction by MAD Magazine's Al Jaffe. IDW and Yoe are proud to offer this book just in time for Gross's 115th birthday.

Available in comic stores today and book stores next week, The Complete Milt Gross Comic Books and Life Story is a testament to Gross's influence on both comics and pop culture, as one of the first mainstream Jewish cartoonists and a pioneer of comic strips, graphic novels, animation and more. Throughout his incredible career, Gross created comic strips and cartoons, wrote screenplays and novels, and created fine art. Gross even crossed into Hollywood, working with Charlie Chaplin and Joan Crawford, and designing sets for movies featuring Bing Crosby, Betty Hutton and others.

"Milt Gross is the number one, most hilarious comic book artist," said Yoe. "And his art style is as modern as tomorrow. It's a thrill to present this wacky, bizarre, genius material."

The beautifully designed book collects the complete comic book stories of this comic genius, culled from rare, impossible to track down comic books of the '40s, which have been painstakingly restored, plus an in-depth look at Gross's life. At 354 pages, CartoonBrew.com called The Complete Milt Gross Comic Books and Life Story "massive" and "an absolute must-have."


The Complete Milt Gross Comic Books and Life Story is the latest great book from the IDW imprint, YOE Books, edited, designed and written by Yoe, winner of both an Eisner Award and the Society of Illustrator's Gold Medal. Coming next from YOE Books is Krazy & Ignatz in Tiger Tea, presenting George Herriman at his best in his only full-length "Krazy & Ignatz" story, available in stores on March 17th. Vice Magazine has deemed Yoe "The Indiana Jones of Comics Historians."

Today, BOING_BOING gave the book it's seal of approval, also!
http://www.boingboing.net/2010/03/16/the-complete-milt-gr.html
Posted by Booksteve at 9:57 PM