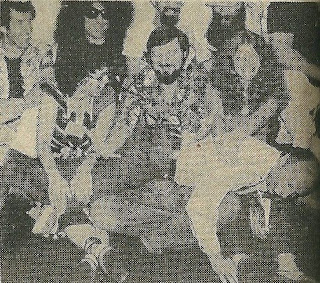 Here's a badly cropped and edited image of a San Diego Con jam session from thity years ago in 1979. The accompanying blurb indicates that the pic was taken before all artists had done their part but that the final list of contributors to this 3 feet by 13 feet wall art included, amongst others, Harvey Kurtzman, Trina Robbins, Shel Dorf, Paul Mavrides, my facebook friend Scott Shaw!, the late Dave Stevens, Alan Weiss, Bill Wray, the also late Marshall Rogers, Dan O' Neill, Carol Lay, Dave Scroggy, Melinda (now Alan Moore's lady!) Gebbie, Ron Turner and Mike Kaluta. Where was Sergio anyway? In the accompanying pic I recognoze only Harvey and Trina. Anyone else?
Posted by Booksteve at 2:49 PM