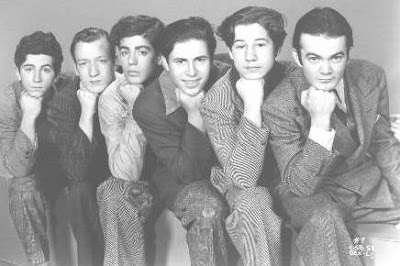 Back in the early 1980's, I actually did a considerable amount of research for a possible book on the Dead End Kids in all of their various permutations but a couple of other guys beat me to it. I have, however, remained a fan since childhood Saturday afternoon TV runs of the later films. The other day I gave a typically overdetailed booksteve comment regarding a question about the Bowery Boys that someone asked on Facebook. Another commenter suggested that I start a Bowery Boys Blog. Since I already have 6 blogs (counting I.T.C.H. where I still post daily), I decided instead to do a running series here at the Library. Let's start at the beginning, shall we?

It all started with playwright Sidney Kingsley who in 1934 wrote a play about kids growing up in New York City during the depression. DEAD END was only his second play. His first, MEN IN WHITE, dealt with the taboo subject of illegal abortions and established him as a "message" playwright. The message of DEAD END was that the big city slums were a breeding ground for violence and gangsters.

Produced by Norman Bel Geddes (father of future DALLAS matriarch Barbara Bel Geddes), DEAD END opened in October of 1935 at the Belasco Theatre for a healthy two year run. Actor Joseph Downing had the pivotal role of the gangster later played in the film version by Humphrey Bogart. (Downing went on to a career in character parts in films and would be reunited with some of the DEAD END cast when he played a small role in 1938's ANGELS WITH DIRTY FACES).

Some now familiar names in the cast were actors Martin Gabel (later the husband of WHAT'S MY LINE'S Arlene Francis), Dan Duryea and Jeannette MacDonald's sister Blossom MacDonald who, as Blossom Rock, would snap her fingers 30 years later as THE ADDAMS FAMILY's grandmother on television. Ten year old Sidney Lumet was also in the opening cast. Lumet would go on to a long and successful career as a film director. The cast listing also shows Marc Daniels who may or may not be the man who went on to be known for directing TV series such as STAR TREK and I LOVE LUCY. (The IMDB and IBDB birth and death dates don't quite match). Actress Marjorie Main would be the only adult to repeat her role in the film version of DEAD END. Although she had already appeared in a few uncredited roles in pictures, she would go on to quickly become an archetypal character actress and eventually the beloved "Ma Kettle."

None of those actors really mattered, though, because the play was entirely stolen by the kids cast as the slum dwelling street toughs. At only fifteen, Billy Halop was cast as the main kid, Tommy. Sixteen year old Henry Hall, known in real life as "Huntz," became "Dippy." Also sixteen, Gabriel Del Vecchio dropped the "Vecchio" and as Gabriel Dell, was cast as "TB," the kid with the chronic cough. Bernard Punsly--often the "forgotten" Dead End Kid--was only thirteen when the play started. Handsome Bobby Jordan was only twelve! The part of "Spit" was played by one Charles R. Duncan in tryouts but was replaced before the official opening night by Leo Gorcey, an eighteen year old plumber's assistant who, along with his brother David, had been previously cast in small parts as the "Second Avenue boys."

DEAD END ran on Broadway with the classic cast in place until Movie Producer Samuel Goldwyn flew the boys, dubbed "The DEAD END Kids," to Hollywood to appear in his film version of the play in 1937. Once the gang stormed Hollywood there would be no going back.
Posted by Booksteve at 10:56 AM