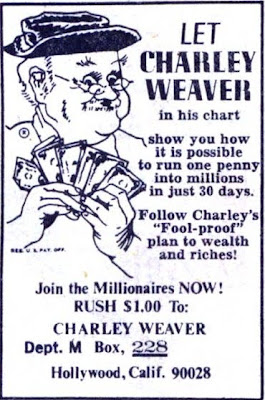 Cliff Arquette figured his career was about over after more than thirty years as a musician and a radio character actor. Then in the late fifties, Jack Paar mentioned his name on-air in a joke and next thing you know, Cliff had his Charley Weaver character appearing regularly with Paar and authoring two best-selling humor books! HOLLYWOOD SQUARES brought "Charley" even more fame in the late sixties/early seventies. According to both host Peter Marshall's book and a couple of other sources I've spoken with, Arquette was quite the tippler and quite the ladies man. In this ad that appeared in comics in the early seventies, "Charley Weaver" promised to show YOU how to become a millionaire with his "chart." Was it serious or a gag? Was it really Arquette at all or did someone just license (or steal) the Weaver persona? What kind of chart was it and most of all...did it work? Surely one of you reading this must have ordered this. Let us know!
Posted by Booksteve at 12:05 PM