Batman, the Joker and Laughing Girl-1966 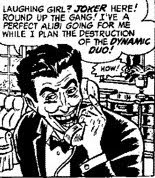 The 1966 newspaper comic strip BATMAN AND ROBIN was one of the more bizarre incarnations of the Dynamic Duo in that it took quite a bit from the camp aspects of the TV series, then in its prime, but kept the visual qualities of the Julius Schwartz era comic books. We've written before about the hard to find strip here at the Library but today we're going to take a closer look at one of its daily stories. This story, featuring the Joker who had quickly become one of the most popular villains on the TV series, ran for more than two months starting in July of the summer of BATMANIA. You'll see a lot of Bob Kane's contactually required signature in these panels but keep in mind that Bob Kane had NOTING to do with this strip! Supposedly written by longtime DC writer/editor Whitney Ellsworth (who had been a producer on TV's THE ADVENTURES OF SUPERMAN), this sequence is drawn by Joe Giella who is currently the artist on the venerable APARTMENT 3G.

We open with millionaire socialite Bruce Wayne answering a summons to visit Warden Crichton (a TV creation) at the Gotham City Prison. There he is introduced to the Joker, with whom he refuses to shake hands. The Joker tells Wayne that he's reformed and ol' wishy-washy Bruce then says, "Oh, well, okay then" and shakes his hand after all. Seems the Warden has just up and decided to parole the arch criminal into Wayne's custody without so much as a heads up. Bruce, naturally, is a bit concerned that this might curtail his nightly activities and tries to wiggle out of it.

Just at that point, Dick Grayson calls Bruce at the Prison to tell him that their faithful butler Alfred has fallen and injured himself and will probably be laid up for some time. "Hah!" thinks Warden Crichton, "Now you'll need a new butler for awhile so you can use Joker!" What's a millionaire to do when society needs his help and fate sets him up? Bruce takes the Joker home to Stately Wayne Manor (home of the Statelywaynes?) much to Dick Grayson's youthful consternation. As we readers suspected all along, that villainous villain is soon on the phone rounding up a gang. 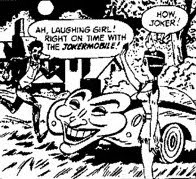 The Joker slips out a side window and meets up with the horribly politically incorrect Laughing Girl who's driven over in his Jokermobile. The two cruise by the bank downtown which Joker's unseen cohorts have just coincidentally flooded to the point where the very walls fal ldown under pressure and the money comes sailing out to them! Uhhhh....right. Suspension of disbelief required on this one, readers.

As on the show, Commisioner Gordon (looking like his traditional comic book self) and Chief O'Hara (a creation of the TV writers) can't seem to do anything themselves so they call Batman and Robin and then stand around the office talking about their man-crushes on Batman. 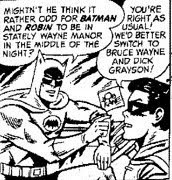 o pursue the Jokermobile but the evil clown escapes with an ejector seat leaving them to find only Laughing Girl who says she was kidnapped. Meanwhile their antagonist retrieves a mini-motorcycle from a hot dog cart that just happens to be out on the street that late at night. Uh-huh. While he rushes back to Statelywayne Manor, our heroes are anxiously cruising home to check his bed themselves.

After convincing Bruce and Dick that he'd been snuggled in bed, the next day Joker contacts his Native American moll (who's clearly smoking SOMETHING here!) about sending in RINGER. Ringer is an actor made up to look like the Clown Prince of Crime who takes his place buttling for the boys as the real bad guy heads out to work on his crimes again. 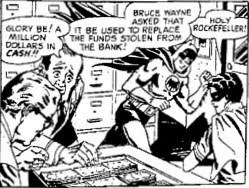 The next morning, Batman delivers one million dollars to the Commisioner TO REPLACE THE STOLEN BANK MONEY!!! He explains to Robin that "The stewardship of great wealth is meaningless unless it is used for great purposes." I see. So is Bruce Wayne's money going to replace every bit of money ever stolen in Gotham then?

Meanwhile, Laughing Girl has been busy buying an abandoned castle in the nearby Batskill Mountains to serve as a hideout for the still unseen gang. In a helicopter, Joker helps her ditch out on her hotel bill by taking her out through the window. The FIEND!!

Bruce easily catches Ringer back at good ol' Statelywayne because he's left handed and the Joker is not! Oh what a giveaway! It occurs to Batman that maaaaybe the Joker really hasn't reformed and that he should have another talk with "that Indian girl." Somehow, they know exactly where she lives and head off to her hotel. By this time, the manager has discovered that she ducked out on the bill and owes them considerable "wampum." Needless to say--and much to Robin's consternation again--Batman agrees to pay her bill! "Would it be fair," he asks, "for the hotel's stockholders to lose out because WE allowed the girl to run free?" A disheartened Boy 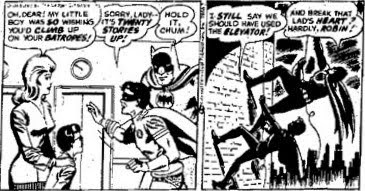 Wonder replies, "I guess I just wasn't thinking Batman." Then they're off to search her room for clues. Can't take the elevator, though. Oh, no. You see, that would dissapoint the little boy in the lobby who wanted to see them climb their batropes. Couldn't do that! So it's up 20 stories on the OUTSIDE of the building!

When they finally reach the luckily open window, who should fly in right behind them but...SUPERMAN! Seems he saw the helicopter take Laughing Girl and just figured he'd tell the Caped Crusaders. He offers to help but Robin jealously tells him, "We'd rather do it ourselves!" 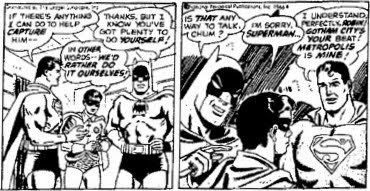 As the Man of Steel flies off, a framed photo of the Joker on the wall turns out to be a radio and he starts talking to Batman who sends Robin down to the Batmobile for a convenient Bat-radio-direction finder. This time the Boy Wonder happily takes the elevator. The only problem is that once they've gotten a beam on where Joker is, they then crawl back down the hotel's outside wall leaving their big, probably expensive Bat-device back in the abandoned hotel room! This version of Batman seems to think money grows on trees!

The Joker is ready for them, however, as he tell 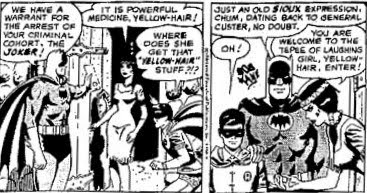 s Laughing Girl about a dungeon full of allitrative death traps. We even see one minion now! They find him easily in their Bat-copter but then naturally fly back to Gotham City where they pick up a search warrant before they can proceed any further! Then it's back to the Batskills where they stealthily approach the castle hideout and...ring the doorbell. Laughing Girl answers and immediately drops them into a pit filled with hungry lions! Oh, no! Is this the end of Batman and Robin?

Of course not. Batman knows that all they have to do is stare down the lions to demonstrate the superiority of man over animals. I'm surprised that this works, however, when you consider the Dynamic 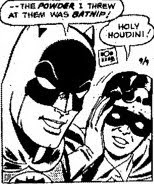 Duo's traditional white eye sockets (unless drawn by Gray Morrow) on their masks! Ever the practical one, Robin suggests killing the beasts only to have Batman remind him that it's "Be Kind to Animals Week." "I'm sorry, Batman. I'm just a selfish little kid." Not to worry, constant readers. Our hero tosses them some "Batnip" which makes the fierce lions roll on the dungeon floor like kittens.

As they climb out of the pit, the Joker rolls a two to 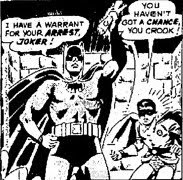 n chrome steel ball directly at them down a sloping hallway which they deal with for nearly two full weeks in the continuity before escaping by spraying it with lox. Not THAT kind of lox, silly! That's what Robin thought, though, too! No, Liquid OXygen! You see there was enough lox in Batman's utility belt Bat-spray thingie to freeze the two ton ball they were holding back with their feet (as improbably as that sounds) to the point where it cracks apart and they're able to get past it! Yay!

At that point, and still with no sign of the "fifty braves" Laughing Girl had rounded up for a gang--even the lone minion had left apparently--Robin simply tackles the Joker and Laughing Girl--who turns out to be in reality one Bertha Schultz--gives up quietly. Batman tells Warden Crichton that he's preeeeeetty sure that the Joker can never be rehabilitated!