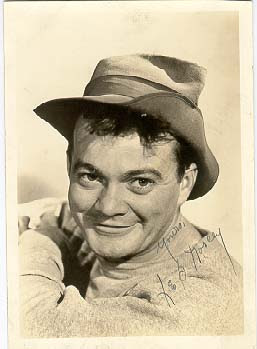 Leo Gorcey was an unlikely star. He had literally been working as a plumber's assistant at age 17 when his Vaudevillian father Bernard Gorcey encouraged him to try out for a small role in DEAD END along with his brother David. He not only got the role but he was chosen to understudy Charles Duncan for the more pivotal role of "Spit." Duncan left the play in tryouts and Leo was moved up. He proceeded to give a memorable performance in both the play and the subsequent movie. Over the next two decades, he would play variations on that same wisecracking, language-mangling Brooklyn punk in nearly 100 movies!

From the beginning, Gorcey was at odds with DEAD END KIDS star Billy Halop. When Halop's contract was dropped at one point (along with several of the other kids), Gorcey was given more screen time in his roles. Ultimately, though, he was plopped back down in charge of a gang, in this case THE EAST SIDE KIDS, who had already appeared in one film without him. Fellow Dead Ender Bobby Jordan went with him and in subsequent films, Huntz Hall and Gabe Dell also rejoined Leo. Bernard Punsly gave up acting for Medical School and Billy Halop went into the army.

As Muggs in the new series, Leo was finally given the chance to play a more or less consistent character and refined him well. Sometimes the early films were melodramatic, other times they were played for scares or for laughs. The inspired pairing of Leo Gorcey and Huntz Hall grew with each picture.

On radio in 1943, Leo took a role as Groucho Marx's comic relief (like you'd need comic relief if you were Grouc 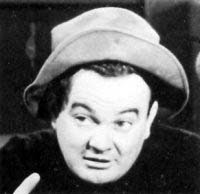 ho) on Pabst Beer's BLUE RIBBON TOWN. Seriously, Groucho Marx acted as Leo Gorcey's straight man! Somewhere in there Gorcey apparently made the mistake of introducing his wife to the legendary "mangy lover." In 1944, as the radio series ended, said wife left him and married Groucho!

Leo pulled himself together and finished up the last few of the 21 EAST SIDE KIDS pictures, then he and his agent formed a new company, consolidated the rest of the gang and started a whole new series with the now no longer "kids," THE BOWERY BOYS.

Beginning in 1946, Leo played Terence Aloysius "Slip" Mahoney in 41 BOWERY BOYS movies with Huntz Hall as Horace Debussey "Sach" Jones while the rest of the gang--which by then included Leo's brother David--became increasingly superfluous. A particular delight of this series was the addition of Gorcey's father, the diminutive Bernard Gorcey, as Louie, the owner of the Sweet Shop where the boys hung out. (Couldn't have 'em hangin' out in a pool hall or anything like that could we?)

Very few of the Bowery Boys series were anything but flat out comedy. Gangster comedy, hillbilly comedy, horror comedy, military comedy, romantic comedy... Only now at this late date is the Gorcey/Hall team starting to get real credit but over time, they refined their act to the point where they are, at their best, a joy to watch.

Always a bit of an edgy troublemaker behind the scenes, the turning point in Gorcey's life and career came when his father died in a car accident in the mid-fifties. He started drinking even more than he already was and quit the Bowery Boys series. With Huntz Hall now listed above the title but his characterization changed a little, the Bowery Boys limped on for 7 more pictures with former gang member Stanley Clements returning to take the "leader" role, playing a totally different character than Slip. Perhaps the series was already on its last legs but the familiar chemistry between the two stars was notably and sadly missed as it limped to an end in 1957.

With more "episodes" than many TV series, the East Side Kids and Bowery Boys films were syndicated on local TV stations throughout the country beginning in the sixties and became favorites, particularly with children. Leo had retired to his ranch and for the most part kept a low profile even as whole new generations discovered his malapropisms.

He took a couple of small TV sitcom guest roles during this period and, like many old time stars, had a momentary cameo in Stanley Kramer's IT'S A MAD, MAD, MAD, MAD WORLD. In mid-decade, Gorcey teamed up once more with Huntz Hall (each in his trademark hat) to steal the show as comedy relief in the country music feature (a lost genre) SECOND FIDDLE TO A STEEL GUITAR. Even though one could see the effects of time and alcohol and their material seemed largely ad-libbed, they were still a welcome --if pointless--addition to the picture.

Although for some reason published only in a now-rare limited edition, Leo's autobiography, the badly titled AN ORIGINAL DEAD END KID PRESENTS: DEAD END YELLS 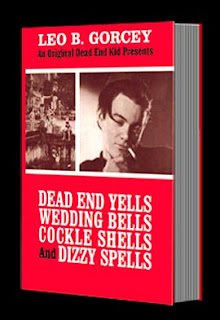 , WEDDING BELLS, COCKLE SHELLS AND DIZZY SPELLS came out in 1967. That same year, artist Peter Blake added Leo and Huntz to the cover of the seminal Beatles album SGT. PEPPER'S LONELY HEARTS CLUB BAND. When Leo, out of all of the dozens of personal Beatles heroes pictured, demanded payment, his image was removed. Huntz Hall's image remains.

Around that same time, Leo did some interviews and TV appearances with WHATEVER HAPPENED TO...?'s Richard Lamparski (some of which can be found on YouTube) and in either late 1968 or early '69, he and Huntz appeared together one last time--ostensibly as themselves although they still had their character hats--in the legendary, unreleased THE PHYNX. With its ridiculous plot, unfunny script, bad performances and scores of bizarre cameos, THE PHYNX is a legitimate candidate for the worst major studio film ever made.

Had it been actually released, it would have been posthumously as Leo Gorcey died in 1969 of alcohol-related liver failure. No less than five marriages in thirty years, a history of anger issues, the alcohol and general bitterness had aged him well beyond his only 51 years.

Leo Gorcey, Jr. wrote a book about his life with Leo, Sr a few years ago and contributed an introduction to a reprint of his father's 1967 autobiography, maddeningly published yet again as a limited edition only! By all accounts, Leo at his best was a charming and funny man, much like Slip Mahoney or Muggs McGinnis. Although originally just a "Second Avenue Kid," Leo Gorcey became over time the heart and soul of the Dead End Kids and their legacy.
Posted by Booksteve at 9:07 AM