My Day at Mid-Ohio Con 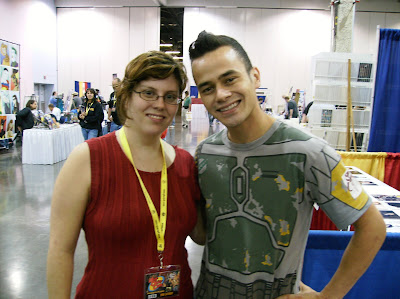 In spite of my paranoia after the problems I've had in years past trying to get to or enjoy Mid-Ohio Con, things went surprisingly well today! Ended up costing a tad more than I had budgeted for (and that's without a lot actual purchases!) but I'm willing to write that off for the sheer fact that son bookdave called it his "best road trip ever!" and if anything Brittany Rose had a better time than anyone!

My wife and I got to meet Fred Hembeck and his lovely wife, Lynn. Fred, as regular readers know, was endlessly supportive when I first started this blog and has been an inspiration ever since. Aside to friend Lisa, Fred loved your squiggly knees idea and suggested getting them tattooed on afterwards!

Spent far too few quality moments with Mark Evanier in between his moderating panels or making presentations. Unfortunately, had to skip his Kirby presentation as my boy was tired after a day of this followed two days off sick from school. Sorry, Mark.

Got to meet Tony Isabella's son Eddie this year and see some bits from his upcoming book, 1000 COMIC BOOKS YOU MUST READ. Can't wait to see how many I've already read!

Spent some quality time talking to my email buddy Mike Grell whilst watching him sketch a very finished looking drawing of WARLORD from scratch! Last time I had seen Grell was at the 1990 Chicago Con and I never would have believed HE would one day say he was genuinely pleased to meet ME! Thanks to Jim Engel for including me on the list with Mike and all of those other cool guys.

Friend Brittany Rose is into oriental art but has always resisted my attempts to introduce her to the Asian-influenced art of David Mack...until she saw D 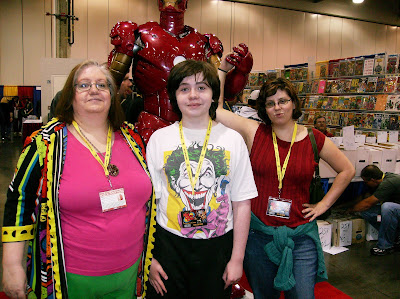 Even better was her encounter with Daniel Logan who played the young Bobba Fett in STAR WARS II. I'll let her tell that story but let's just say it made her day and made our whole trip worthwhile!

Also spoke briefly with Len Wein who reports his thanks to all the bloggers who reported his plight and helped him out after the terrible fire he had this past year. Got to at least see Dick Ayers, Keith Pollard, Arvell Jones, Bernie Wrightson (lasy seen by me in '77!) and Comic Book World's Paul Mullins. Kept missing Gary Friedrich and surprisingly Happy Herbie Trimpe was always so surrounded by fans that I could never even catch a glimpse! Although never a favorite artist, I hear he's one of THE nicest Con guests ever!
Would love to have spoken more with cartoon voice great Gregg Berger who was incredibly nice and interesting but I was pulled away and never found my way back before I left. Sorry, Gregg, but you were a highlight of my day nonetheless.

I bought 1 DVD set, a few paperback books I'll probably blog about later and a full-size KINGDOM HEARTS keyblade for bookdave's upcoming birthday this month! Brittany Rose bought a hat, a shirt and some signed photos (3 for the price of two!). 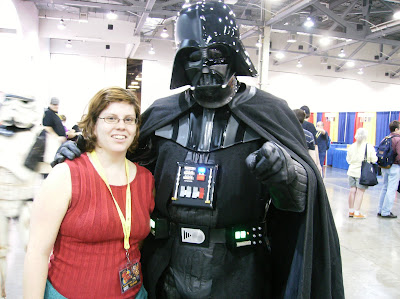 They had lunch (I can never eat on Con days. Don't know why. Just doesn't work.) at a lovely place called Tim Horton's that BR remembered fondly from her time at OSU. We even went back before we left town to pick up some doughnuts to go. The trip both ways went without incident although I still had a deathgrip on the wheel out of habit. In fact the Hyundai Sonata we rented ran so smoothly I often found myself unexpectedly doing 80 miles per hour!
We drove it straight back to the rental lot where we had to walk about half a mile in freezing cold back to our own car. A quick stop for another meal (My first of the day. I could eat now that the day was nearly done, you see.) and then home to collapse. I'm the last awake. Collapsing now!
Posted by Booksteve at 9:49 PM