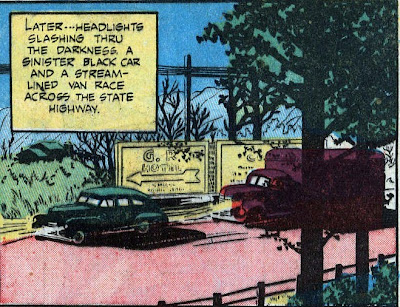 I love finding in-jokes in old Comic books like the villain in an old PLASTIC MAN being "Eloc" which, spelled backwards, is Cole...as in the series creator Jack Cole. Or the sign in an old GIANT-MAN that says "Ayers Oil Company" as in the artist Dick Ayers. Or as in all those early seventies Spider-Man stories where you can spot portions of "backgrounds by (Tony) Mortellero" in nearly every Romita-drawn issue.
Here, from the BATMAN strip in a 1942 WORLD'S FINEST, is a throwaway reference to the GR Hotel. It's widely known that artist George "Inky" Roussos was an assistant on BATMAN during the early forties. How much you wanna bet he did the backgrounds here and threw that in as his little signature?
Posted by Booksteve at 3:55 PM