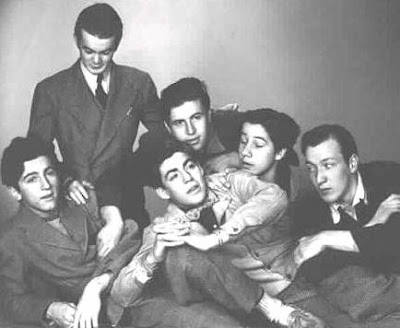 Billy Halop was the scratchy-voiced little old man cab driver Burt Munson on ALL IN THE FAMILY for several seasons beginning in 1972. To me he looked 70ish even then but he was only 52. He would die in late '76 looking far older than his age of 56.

Although reportedly disliked by most of the other gang members because of his star treatment and overshadowed by Leo Gorcey's longer run as the leader of the various Dead End Kids spinoffs, make no mistakes about it, Billy was the one and only leader of the original kids. Halop had begun a long radio career (along with his sister Florence who would much later appear on TV's NIGHT COURT) while still a child and was already a veteran thespian by the time he was cast in Broadway's DEAD END.

Although he played different characters, he remained the gang's leader throughout all of the subsequent Warner Brothers features only to have his contract dropped along with Gabe Dell, Bernard Punsly and Huntz Hall. While Leo Gorcey and Bobby Jordan remained at Warner's, the rest of the Kids regrouped at Universal where they continued on in a very similar series of pictures including two action serials. These films all contained various combinations of once and future members of the gang.

By the time the whole gang was regrouped as the East Side Kids, Billy was off to fight WWII. On his return he was a forgotten man in Hollywood and once again found much of his work on radio. Depression, alcoholism, bad marriages and a reported suicide attempt followed in rapid succession. With acting work sporadic, he became first a salesman and later, after caring for a wife with multiple sclerosis, a registered nurse.

By the sixties, with the demise of radio, Halop began picking up more and more small parts on television. A one shot guest appearance as a different character on ALL IN THE FAMILY got him the occasional role of Munson the cab driver.

Towards the end of his life, he was, like many once popular stars, trotted out from time to time in the tabloids as an example of "too much too soon" and "look what alcohol can do to you." He was said to have been pleased with the growing revival of interest in the Dead End Kids films that probably stemmed from most cities running Bowery Boys pictures every weekend but lamented that they got no money out of any of it anymore. Long estranged from the co-stars with whom fate had tied him forever, only Gabe Dell is said to have remained on good terms with Billy throughout the years. By all accounts he and Leo Gorcey were never close.
Posted by Booksteve at 10:35 AM