Movies That Fell Through the Cracks # 56 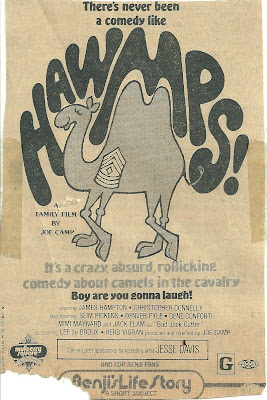 HAWMPS was a 1976 attempt by family film producer Joe Camp to move beyond the successful BENJI films that had originally starred the dog who had appeared on TV's PETTICOAT JUNCTION. You'll note from the ad that they hedged their bets by pairing it with a new short entitled BENJI'S LIFE STORY. They even threw in singer Jesse Davis who had previously gained some fame for performing I FEEL LOVE, the Oscar-nominated song from BENJI.

HAWMPS is based on the supposedly true story of a 19th Century US Cavalry Unit that imported camels to be used in place of horses as they were based in a desert. The star was James Hampton, a reliable character actor for whom this may well have been his only starring role. Best known for his supporting roles in F TROOP, THE DORIS DAY SHOW and several Burt Reynolds pictures, Hampton worked early on a s Fumetti model for Harvey Kurtzman's HELP magazine and later added writing and directing to his resume. 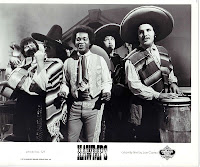 (but good!) TV version of PAPER MOON. He worked steadily for another decade or so after HAWMPS and achieved some measure of real fame as an action star in Italy before succumbing to cancer in 1988.

Slim Pickens, Denver Pyle, Jack Elam, Herb Vigran and Gino Conforti are some of the better known character actors rounding out the cast. Benji's trainer Frank Inn appears in a cameo role and actor Tiny Wells is credited as playing a character named "Higgins," yet another nod to the producers' canine breadwinner as Benji's real name was in fact...Higgins.

Nothing special as a film, it's a TV quality romp with some fun and always enjoyable performers. Most of the crew were, in fact, from various TV series including HAPPY DAYS.

HAWMPS is out there. Not too hard to find but as G-rated films go, still deserves to be remembered a little more than it is.

Aside--One of the credited stuntmen was George Fisher who had worked in 1973 on Christa Helm's LET'S GO FOR BROKE. He had probably been brought on to THAT film by its original, uncredited director, stuntman Alex Stevens, with whom he had worked previously on NIGHT OF DARK SHADOWS.
Posted by Booksteve at 1:58 PM