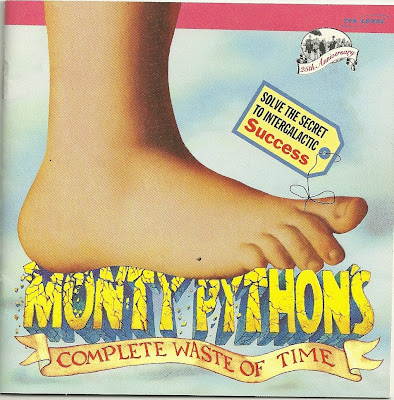 My wife had a Tandy computer back in the eighties and when we were first married in the early 1990's, I set it up to play the intriguingly titled but ultimately disappointing LEATHER GODDESSES OF PHOBOS on them big ol' floppies! AHEM...

Anyway, we bought our very first REAL PC in 1994. After looking around the computer store for hours, we settled on one we thought sure had a real future--a STARION! (Sound of crickets) It took me a few days to get it all plugged up right but then we couldn't figure out anything to do with it.Luckily we had prepared for that and bought our first software that night, also. MONTY PYTHON'S COMPLETE WASTE OF TIME. With the lads all over the TV last week and this for their 40th anniversary, I remembered this enjoyable mess and dug it out last night. Technology being what it is, however, having been designed for Windows 3.1 it does NOT work on Vista. Sigh. It was a lot of fun, though.

MONTY PYTHON'S COMPLETE WASTE OF TIME was award-winning software in its day. It featured mini-games, dozens of live-action clips from MONTY PYTHON'S FLYING CIRCUS and a secret, hidden game that if you found it and beat it by a certain date could win you big prizes! There was even some new material by Terry Gilliam and Eric Idle (and possibly some of the others). 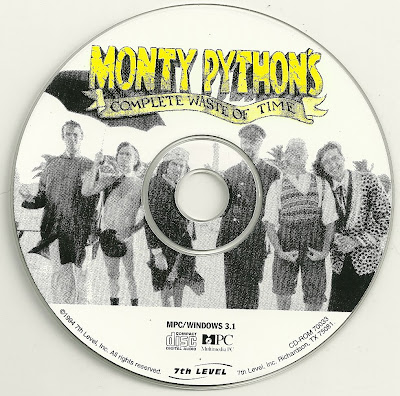 Here's an excerpt from the only Walkthrough I could find online--

1. To solve The Secret to Intergalactic Success, you must solve each of the brain lobes. To solve each lobe, you must gain access to Inner Space, obtain the four essential clues and use those to solve the lobe.

2. The Loonatorium is the central dispatch for finding The Secret to Intergalactic Success. Play Spot the Loony for hints on solving the secret and to find out which lobe to go to next. Be sure to play until the hints begin to repeat themselves.

3. In each of the scenarios or lobes, you gain entry to Inner Space by finding The Spanish Inquisition. Go to the lobe suggested by the Spot the Loony announcer. After the Cardinal says Nobody expects the Spanish Inquisition, click on the door, answer the trivia question correctly and you are in. All of the answers to the trivia questions are found within the title so don't be afraid to explore.

5. Once in Inner Space, control access to essential clues by using the Shift key on the keyboard in combination with the question number.

6. Access to Inner Space from the Exploding TV Room can be gained through the Television. Pythonvision, which can be brought up by clicking on the right button on the TV, makes a great remote control. Try watching a show about that penguin on top of the telly. 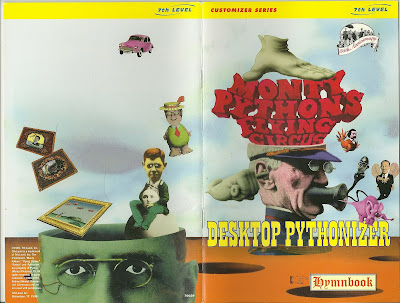 Posted by Booksteve at 1:42 PM