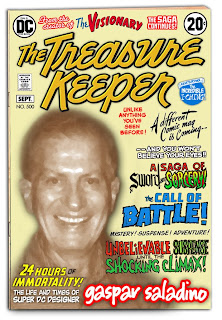 Y'know, even as a child, I wondered why DC never credited its letterers the way Marvel did--especially as I never found anything all that special about the lettering of Marvel's Sam Rosen and Artie Simek. In fact, around the time I was really getting into comics, DC's lettering in their books and in their house ads got rather spectacular. Even though they still rarely gave credit, the name I started hearing in the occasional letters columns and fanzine pieces was that of one Gaspar Saladino.
Over the years, I've come to find out that Saladino was responsible for most of the DC house ads of my youth that are SO nostalgic to me now. He created the logos and lettering for many of my favorite late-sixties DC series and his style was one of very few lettering styles that I came to be able to recognize most of the time on sight! In fact, in my day to day job I find occasional use for block lettering and I never do anything normal--I do Saladino-lettering! Words with jagged edges or fire inside them or shading from the bottom or letters covering themselves. I learned! Gaspar (as he reportedly called himself after awhile) must have been in calligraphy heaven when DC turned him loose on Grant Morrison's now-classic ARKHAM ASYLUM graphic novel. His unique lettering offsets Dave McKean's ultra-modern illustrations by giving every single character individualized styles that are at once reminiscent of his classic work and yet cutting edge! I actually found that to be my favorite part of the graphic novel!
Find out everything you never realized you needed to know about the unsung Gaspar Saladino in today's 24 hour celebration at Dial B For Blog (http://www.dialbforblog.com/).
Posted by Booksteve at 11:23 AM