Whatever Happened to the Japanese Spider-Man? 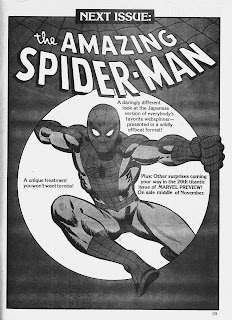 To be exact, this ad appeared in the back of MARVEL PREVIEW # 19 stating some sort of all-new Japanese treatment of SPIDER-MAN would be appearing in the foillowing issue. When, in fact, the following issue came out, it was filled with reprints from earlier Marvel mags. I no longer have issue # 20 but I don't recall any explanation as to what happened to the Spidey piece. Since the funky Japanese TV version (of which we have a number of episodes here in the Library) with the transforming Spider-Machine and the giant monster of the week was airing at that time, I'm going to venture a guess that the intent was to do some sort of photo comic from it and the result proved to be unpublishable. Tony? Anybody else?
Posted by Booksteve at 10:34 PM