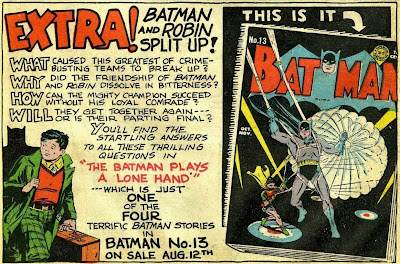 Here's a nifty Bat-ad from 1942. Recently we wrote a little about Jerry Robinson, the original Bob Kane "ghost." The cover in this ad is a fine example of Robinson's work on the strip. In fact, Dick Grayson looks to me to be Robinson's work, also, but GCD says that "Batman Plays a Lone Hand" was (gasp!) really drawn by Bob Kane! Inks are credited to Robinson, though.
Posted by Booksteve at 1:41 PM