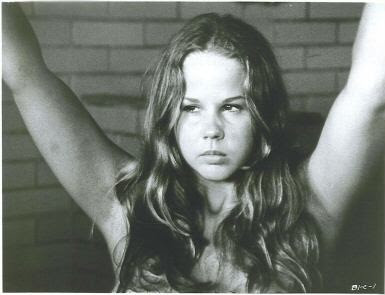 After THE EXORCIST, Linda Blair's first theatrical film was AIRPORT 1975 in which she was lost in an all-star cast while waiting for a kidney transplant and having Helen Reddy serenade her (as a nun). Perhaps not a good career choice. Our favorite lady fared a bit better on television not long afterwards when she starred in BORN INNOCENT, a tough and controversial TV-movie that presented what was arguably (at age 15 I believe) her strongest performance ever. Sadly a bit of a punchline now due to the often excised scene of the teenage delinquent Linda being violated by a broom handle by other inmates in her reform school, that scene was nightmarishly handled and in its own way scarier than anything in THE EXORCIST. Linda followed it up with SARAH T-PORTRAIT OF A TEENAGE ALCOHOLIC, another strong TV film co-starring Mark Hamill (pre-STAR WARS). Eventually, she was replaced as the TV teenage "issues" girl by (of all people) Eve Plumb (in DAWN-PORTRAIT OF A TEENAGE RUNAWAY) and Linda returned to the big screen in vehicles of ever-lessening quality such as ROLLERBOOGIE, WILDHORSE HANK and EXORCIST 2 (which must have seemed like a good idea at the time but...) Still, for those who question whether Linda legitimately deserved the Oscar nomination for THE EXORCIST, look no further than her performance in BORN INNOCENT. No Mercedes MacCambridge there. This girl could ACT!
Posted by Booksteve at 8:25 PM