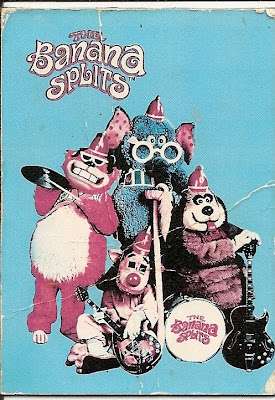 This weekend marks the fortieth anniversary of the debut of THE BANANA SPLITS, 4 guys in hot looking animal costumes doing low-brow comedy with voices dubbed in by guys known for much better things. Hmmm...that doesn't exactly explain the appeal this show had or why even son BookDave gravitated toward them at age 6 (about 6 years back now) to the point that to this day we have the magnet seen here on our refrigerator (one of only two! The other is THE FLINTSTONES). Anyway, in honor (?) of that now-legendary first appearance, here's an exclusive guest blog report from ace researcher Derek Tague:

This coming Sunday marks the fortieth anniersary of the premiere of "The Banana Splits Adventure Hour" over NBC. A few years ago, I accessed a 60-minute episode of such at The Museum of Television and Radio (MT&R) in New York City. Approximately 20-25 minutes into the precedings, Fleegle was doing some schtick with one of the puppets, a cuckoo clock's resident bird who sported a rainbow-colored head plumage (evocative of the guy wearing a rainbow afro wig while carrying the "John 3:16" sign at football games). The brief routine resulted in sawdust being emitted from the clock, causing Fleegle (voiced by the indomitable Paul Winchell) to laugh culminating in Winchell saying under his breath, "Oh, shit."

I rewound this several times to verify "did he say what I thought he said?" At a later date, my pal Brendan Spillane took a sojourn to the MT&R, and he, likewise, rewound it and corroborated my findings...going so far to say that this had to have been the premiere episode of the "Splits" since there were introductory elements in the "Arabian Knights" cartoon that preceded the cuckoo clock scene.

The Museum of Television and Radio has since been re-christened "The Paley Center for Media." A couple of weeks ago, my pal Dan Hollis http://timetravelispossible.com and I accessed the same "Splits" episode and I showed him the scene, and Danny has also verified that long before Mark Harmon uttered "Shit happens" on an episode of "Chicago Hope," that the suspect word got through NBC's "Standards and Practices" and aired nationally on Saturday, September 7th, 1968.

It turns out Dan, a video collector and archivist in his own right, has a copy of this "Banana Splits" episode. He played it at home for his wife Charlene and .... until the video surfaces on YouTube, it is overwhelmingly safe to assert that one of my all-time heroes, a certain ventriloquist/voice-over artist/cardiologist, said one of George Carlin's "seven dirty words" on a nationally aired kiddie show back in 1968, forty years ago this Sunday.
Posted by Booksteve at 7:10 PM