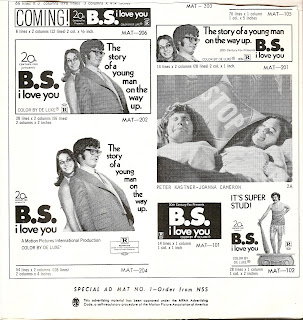 Certainly not as well known as Paul Newman but I've just learned of the September 18th death of Canadian actor Peter Kastner who, for one brief moment in the late sixties, seemed to be the next big thing that never was.
Sort of a low-rent Robert M 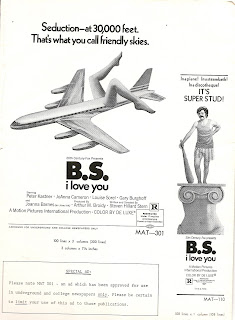 orse, Kastner starred in Francis Ford Coppola's early film, YOU'RE A BIG BOY NOW and a short-lived but memorable TV series entitled THE UGLIEST GIRL IN TOWN in 1967. The film seen here (from the original pressbook here in the library's collection) is B.S. I LOVE YOU, a virtually unwatchable picture that would probably have been forgotten completely by now if not for the debut of a topless Joanna Cameron ("Oh Mighty Isis" indeed!).
Kastner had a small role in the early seventies PBS play, STEAMBATH with Bill Bixby and a briefly naked Valerie Perrine (a first for American TV?) and I'm not sure I've seen him since except in the ocassional airings of his films. I discovered him at an important point in my childhood, though, when I was discovering EVERYTHING and forming my tastes in movies and TV. Because of that, I've never forgotten him...even though I never really knew him. Rest in peace, peter.