Jerry and Neal and Jerry and Joe 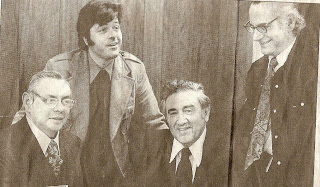 Undoubtedly from the late seventies when Neal Adams (then the most popular artist in comics) and Jerry Robinson (the original BATMAN ghost) were shaming Warner Communications into giving Siegel and Shuster at least SOME of what they were owed, here's a great photo I'd never seen before. This appeared recently in USA TODAY's huge article about Jerry Siegel which plugged Marc Tyler Nobleman's BOYS OF STEEL and Brad Meltzer's new (and strangely-related) bestseller, THE BOOK OF LIES! In case you didn't know, l to r you've got Joe Shuster, Neal Adams, Jerry Siegel and Jerry Robinson. See Gerard Jones' MEN OF TOMORROW for details of the campaign which not only got S & S some long overdue money but returned their credit to SUPERMAN.
Posted by Booksteve at 9:15 AM