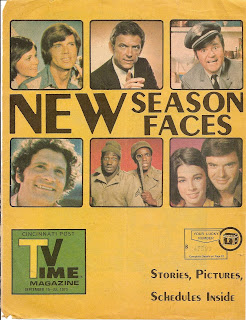 Not THIS one of course. We live in the past a lot of the time around here so here's a local TV mag cover celebrating the new breakout hits of 1973!

Stu Gilliam and Hilly Hicks starred in ROLL OUT, a World War II variation on M*A*S*H that attempted to comment on contemporary America in the same manner. Amiable performances couldn't really help the heavy handed and just plain unfunny scripts but I watched regularly and kept hoping for the best.

Dom Deluise is a force of nature that has never been successfully tamed in movies or TV in my opinion but LOTSA LUCK was at least enjoyable. Based on the British ON THE BUSES (in keeping with the trend of the day to Americanize Britcoms), a great supporting cast included Katleen Freeman and Beverly Sanders. This one at least can be found at Amazon.

BOB AND CAROL AND TED AND ALICE was a toned-down version of the naughty big-screen swinger sitcom of a couple years earlier. On TV, it's notable only as being the first in a long line of regular series for the late Robert Urich who at one time held the record for the number of series in which he starred or was featured weekly.

TOMA was an above average cop show bouyed by the performance of intense stage and film actor Tony Musante. Musante was apparently a perfectionist however and the series fell apart because of his demands. In spite of the fact that it had been based on a real police officer, it later resurfaced as BARETTA for a healthy run with the less problematic(!!??) Robert Blake in the lead.
THE GIRL WITH SOMETHING EXTRA was a cute but badly-timed attempt at recreating BEWITCHED-style comedy by having former Gidget Sally Field as a young wife (to pretty boy singer John Davidson and his hair)with ESP.
Finally, there was THE NEW PERRY MASON which asked us to accept genial Monte Markham as repacement for Raymond Burr (who was himself still appearing as IRONSIDE on network TV). Sure several actors had played Perry on film before the classic TV series but if ever an actor ruined a role for anyone else, it was Burr. This series quickly disappeared (and kind of took markham's career with it apparently) but when Burr returned a few years later in the Mason TV-movies, the ratings were nearly as huge as he himself had become!
For the record, few if any of these expected hits lasted until the midway point of the season.
Posted by Booksteve at 9:18 AM