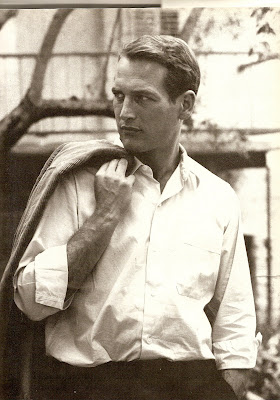 Paul Newman died yesterday. Yesterday I was thinking of Paul's health as I ate his spaghetti sauce on a lasgna I'd fixed. A major star for my entire life, he was one I really wish I could've met. If I had, I certainly wouldn't have asked his autograph. According to legend, Paul quit signing autographs decades ago when a guy approached him for one at a urinal!
Amazingly charismatic onscreen, the blue-eyed Newman enlivened any number of lesser vehicles but was given the chance to shine proudly in more than his share of classic films, also. I first saw him in 1958's RALLY ROUND THE FLAG, BOYS, a perennial TV favorite in the mid-sixties. On the big screen, I first noticed him in BUTCH CASSIDY AND THE SUNDANCE KID (and only because it was double-featured with--strangely enough--BENEATH THE PLANET OF THE APES). THE STING, in 1973, turned out to be one of my all-time favorite films and one I can view countless times without ever getting tired of it! THE TOWERING INFERNO is an all-star disaster flick but watch for the actors duel between Newman and Steve McQueen. Both insisted on top billing. The argument was settled by having one's name on the left of the screen (ie: first) but the other's higher (ie: top).
From there, I went backwards to discover HUD, COOL HAND LUKE, HARPER and THE LEFT HANDED GUN. THE LIFE AND TIMES OF JUDGE ROY BEAN was a scenery-chewing favorite.
FORT APACHE THE BRONX, THE VERDICT and NOBODY'S FOOL were later favorites and Newman ended his career with a surprisingly nuanced vocal performance as the wizened old car in Pixar's CARS (and its attendant short subject). An appropriate role for the old racer.
Along the way, Paul Newman had a long and by all accounts wonderful marriage with Joanne Woodward, drove race cars and created a line of grocery store sauces, salsas and popcorns from which the profits funded various charities! Along with his longtime collaborator, A. E. Hotchner, Newman even has a current book out about their food enterprise!
Blue-eyed, iconic, deep and yet with a grin for the ages, Paul Newman was certainly one of the greatest film actors of his generation. My favorite Paul Newman memory, however, is of David Letterman's first appearance on CBS, lo these many years ago. After switching from NBC, CBS gave Dave the redone Ed Sullivan Theatre for his series. Surveying the audience that first night, Dave heard a heckler who yelled, "Where the hell are the singing cats?" It was Paul (who rarely did TV).
Cue the Scott Joplin music.
Posted by Booksteve at 10:42 AM