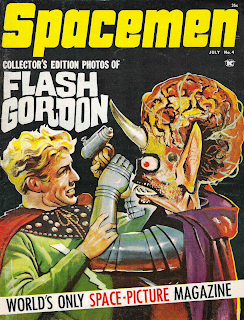 Here's an interesting story behind the cover of a 1962 magazine. SPACEMEN was designed to be the sci-fi version of FAMOUS MONSTERS OF FILMLAND, catering to editor Forry Ackerman's true love--sci-fi. The articles had the same reverential but tongue-in-cheek style, the format was the same and even the concept of having artist Basil Gogos paint the covers was the same. The thing is, when this one came out, old-time fans were confused. At no point in any of the serials did Buster Crabbe's Flash Gordon fight a hideous alien monster like the one depicted here. Enough fans were perplexed enough to write in and the next issue's letter column offered the unusual explanation that follows!
"Actually the cover on our July issue was a collectors item--the first collaboration between Basil Gogos and...Jim Warren! Upon completion of the left hand portion of the painting, Gogos was suddenly stricken with Venusian Virus and ordered to bed by his physician with a 103 degree temperature. Originally Emperor Ming was to be fighting with Flash but suddenly the choice was either a half-blank cover or___? So borrowing a popping eye from Peter Lorre, a bolt from the Frankenstein monster, a swelled head from the Metaluna mutant, a horn from a triceratops and the robotic arms of a robot, your resourceful publisher himself rushed out and got a Draw It Yourself Kit and, with the printer panting down his neck, painted the "immortal kitchen sink creature" which so many of you hailed as a Monsterpuss!"
Posted by Booksteve at 11:57 AM