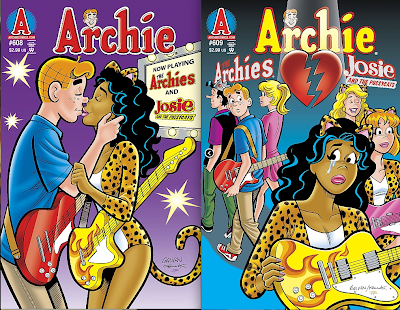 I recently had the pleasure of speaking with Archie Comics writer/artist Dan Parent on the ‘Net for a forthcoming project. Parent’s name has been in the news quite a bit recently for his controversial creation of the first openly gay character in Riverdale. Perhaps because of the substantial news coverage that Kevin Keller’s still upcoming debut received, Dan managed to sneak by with another potentially hot topic—Archie’s first inter-racial romance!

The recently released ARCHIE issues 608 and 609 featured this two-parter which turned out to be one of THE most surprisingly enjoyable and genuinely romantic stories I have read in a comic in a long time. Plotwise, the Archies agree to a small tour with the more professional band, Josie & the Pussycats, both, of course, occasional sources for plots in their respective red-headed leads’ individual series for 40 years now.

One day after rehearsal, Valerie, the once-token African American smart pussycat, stays behind to help Archie finish working on a song. They eat, they talk, they write, they banter…in short, they fall in love. It’s a beautifully done, fairly realistic scene told in quick cut cinematic-style shortcuts by Parent’s collaborator here, artist Bill Galvan. Yes, Archie falls for every pretty girl. It’s his nature. The way this is written and drawn, though, the reader knows something is different this time.

Deciding not to rock the boat of the successful tour, the pair reluctantly keep their relationship a secret, meaning that every night, poor Valerie has to listen to Josie share the heartfelt love song she had written with Archie.

Little by little, the secret gets out, though, as knowing glances and terms of endearment (She calls him “Freckles”) are notice by all…well, nearly all.

They make a truly sweet and fun couple. Perhaps the most important and telling aspect of their relationship is that NO ONE raises an eye over the race issue! There's one scene where it seems as though someone might do so but their complaint is actually completely unrelated. Parent actually manages to come up with an ending which, although bittersweet, allows all kinds of speculation as to the future of the whole relationship and its effect on Archie’s OTHER relationships, also.

All I all, in these days when I’m reluctant to pick up even the most basic superhero comic for fear of being assaulted immediately with visceral panels of entrails and gore, I found the Archie/Valerie coupling to be quite touching in many ways. For those of us who have always appreciated the untapped potential of mainstream comics, here’s someone tapping it. I can’t wait to meet Kevin Keller now!

Posted by Booksteve at 2:09 PM