It Happened in Hollywood-Long John Nebel

Here is one of the funniest things you'll ever hear if you like to hear folks just plain losing it. This is Long John Nebel, a radio talk show host from the mid fifties until 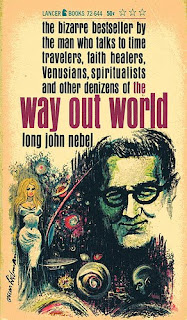 his death in the late seventies. He was an interesting character himself, arriving late to radio and pioneering the long hours of talk radio one can't avoid these days. He frequently had sci-fi authors as guests and often discussed UFO's and other alleged phenomena. Jackie Gleason and James Randi also appeared on a fairly regular basis as skeptics. His late in life pin-up girl wife was allegedly a mind-controlled CIA victim and became co-host of his all-night show in its final years.