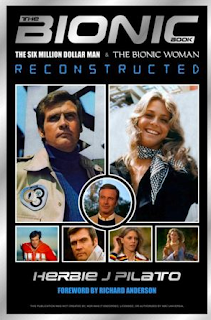 THE SIX MILLION DOLLAR MAN is one of those TV series that has not weathered memory well with me. I wouldn't miss it in the 1970's and the companion series that emerged, THE BIONIC WOMAN, was--if anything--an even better show! Those rare few episodes of either one of them that I've seen in recent years, however, have left me less than impressed except on a purely nostalgic level.
That's where Herbie J. Pilato's BIONIC BOOK hit me: right in the nostalgia. As TV show books go, the author has demonstrated previously that he knows how to write them the way I like them. I like a detailed history of how the series came about, how it was cast, the behind-the-scenes network issues, the important episodes, the success stories, the failures and just enough behind the scenes gossip without getting into any major negativity.
Then I like a nice long list of every single episode, its title (whether given on the air or not), its guest cast and just a succinct retelling of the plot (as opposed to some nameless writers who pad out most of the book with the plot summaries!), followed by relevant behind-the-scenes tidbits on that specific episode. That's here also.
The fun for me in THE BIONIC BOOK is in the memories it invokes of those more innocent days when a slow-motion run with sound-effects constituted super-speed and we all accepted that. Excerpts from interviews with anyone and everyone connected with the two series from Martin Caidin (who wrote the original CYBORG novel) and stars Lee Majors (a Kentucky boy himself and a distant relative according to my wife the genealogist), Lindsay Wagner and Richard Anderson to individual episode directors and tech folks are interspersed throughout the narrative.
By the end of THE BIONIC BOOK, I can't say I had a new respect for the actual episodes but I certainly DID have a new respect for what everyone went through to make what were some good, entertaining, inspiring, family-friendly action series episodes that were very much of their time. As TV books go, a good one like THE BIONIC BOOK can be as enjoyable or more so than the shows it covers!
Posted by Booksteve at 7:24 PM