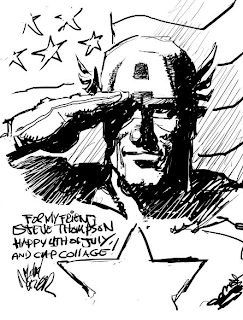 When I used to go to Cons all the time back in the seventies and eighties, I wasn't one of those folks who just had to get a sketch from the guest artist(s). Not that big on autographs, either, really. I'd rather have some interaction with the person to remember. Nonetheless, as I am and always have been essentially shy, I rarely interacted with the guests at all. At one point, though, I had a plan. I would take a poster board in a big ol' folder to every single Con I attended and I would get each guest I spoke with to draw me a quick headshot of my favorite hero, Captain America. I actually did carry it to one show but it became obvious that it wasn't helping me break the ice. Shyness hurts. And remember, I was a teenager and an adult during this period. I was also a store manager for part of it dealing every single day with the public and a dozen employees and I was damn good at it! I did get a quick self-portrait from Frank Thorne in 1977 and a full page Uncle Scrooge from Don Rosa at a local signing ten years later but that was literally it.
So this year, I decided to make a virtual CAPTAIN AMERICA collage for the blog here on Independence Day only to find that if my Mac can do that as well as some Windows programs I'm stymied as to how that w 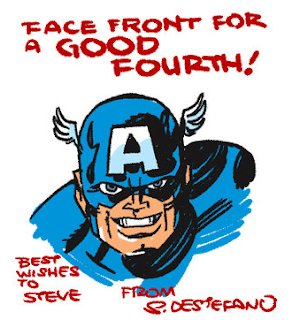 ould work. So instead, I took the Cap Heads I had snipped and scanned from various sources and posted them on Facebook...and the first two folks to comment on them were pros. People I would probably even now be too shy to speak with in person. One of them was the underrated Stephen DeStefano and the other was our old friend here at this blog, Michael Netzer. Longtime readers will recall that I actually did see Mr. N at a con once many years ago. I stood voyeuristically eavesdropping as he talked to others but I couldn't say anything. And now, today, at long last, Mr. Netzer has contributed the first original Cap head to my long dreamed of collage! Wow! Too cool. And then a second addition shows up! This one is from Stephen DeStefano, artist on the great 'MAZING MAN amongst many other things. Things change. Thank you, sirs! And a happy, CAPPY 4th to you all!
Posted by Booksteve at 1:01 PM