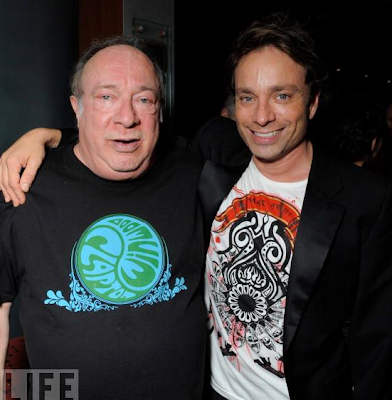 REVISED
This one hits me harder as it was exactly a year ago this week that I first heard of Kip when my son and I watched the BATMAN episode on which he co-starred in a surprisingly well-rounded role as a Joker henchman opposite singer Donna Loren. I said to bookdave, "Hey, this guy's GOOD! Wonder whatever happened to him?" This being the Internet Age, I looked him up and a week later began a long series of telephone conversations with him. The photo above, with son Chris Kattan, was taken AFTER my interview and just prior to Kip's ten month hospital stay.
The photo he used for his Facebook profile pic when he joined not long after we spoke, was a screen grab that I did for my interview from an episode of LONGSTREET. That pleased me quite a bit. He got me looking for old TV episodes he was in and I found quite a few and either mailed them to him or told him where he could get them--MAN WITH A CAMERA, THE BEVERLY HILLBILLIES, THE RIFLEMAN, LONGSTREET, BARNEY MILLER, etc. There were some he really wanted that I was never able to find. Sorry, sir. 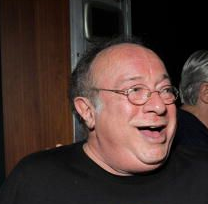 He called a few times a week after that first conversation. When he wasn't out promoting Chris's BOLLYWOOD HERO which Brittany and I sat and enjoyed immensely when it aired! Making fun of himself, and playing himself, Kip's small role was hilarious. He was so amazingly proud of Chris. Although I purposely didn't bring up his son in our initial talks, not wanting him to feel I wasn't taking him on his own, it didn't matter. He brought up Chris, early and often! I have never seen a prouder father!
Kip and I spoke of his troubles with women and how he had finally met and married a woman he felt was the best thing that happened to him. We swapped stories of marital issues that all couples have to surmount and I was proud when he said my wife and I were setting a good example of how to make it all work!
We spoke of old Hollywood gossip including shocking stories (if true!) on J3rry L3wis and T@ny C#rtis! Shhh! Had to edit those out of the interview. We spoke much of Stan Laurel as Kip was one of a number of folks who befriended the great screen comic in retirement after finding him listed in the phone book! He said that somewhere he had a tape he had made of a phone conversation with Stanley.
We spoke of the Groundlings and his love of improv as a comic art! He reminisced about the well-known names with whom he had worked there and the lesser-known names, with much love given to Tracy and Laraine Newman.
We had hobbies in common even! He was a comics fan and whilst not exactly a collector, he knew much about EC books and art. Something he was really into was Old Time Radio and we talked about his experiences at Sperdvac.
He absolutely loved THE SMURFS (on which he was the voice of Tailor Smurf) and just about everyone connected with it, particularly June Foray and Lucille Bliss and was amazed to hear they were doing a SMURFS movie and hadn't contacted him! As far as June, he told me one story she definitely left out of her autobiography (which I had transcribed just weeks earlier!).
At one point Mr. King suggested we write a book together--not so much his autobiography but a collection of anecdotes and reminiscences about his show business career. He said--and rightly so--that I just had to help him make sure he didn't go into print with anything legally actionable! We even had a publisher interested in looking at a couple of chapters.
Then he quit calling or returning calls. It was months later before I found out the extent of his health issues which had landed him in the hospital. There were times he'd rally, times they supposedly spoke of sending him home. In the end, though, he grew tired of the fruitless struggles and endless pain and earlier this week made the tough decision.
After I interviewed him last year, I went on to interview sixties Dr Pepper girl, singer Donna Loren, who had co-starred with Kip on BATMAN. I was able to re-connect the two after more than 40 years. This morning I gave Ms. Loren the news. She responded, My dear, I spoke to him briefly after you forwarded his info. He was still a rascal and asked me 'why didn't you ever make it big?' "
Those who knew Kip King are eulogizing him today as one of the funniest men who ever lived. He wasn't a big name. His death won't get a lot of coverage. But Kip King--as a friend, a teacher and a mentor--made a real difference in many people's lives. In the end of the day, that's what counts. It's cliche but it's also true...Heaven just got funnier.
Posted by Booksteve at 8:14 AM