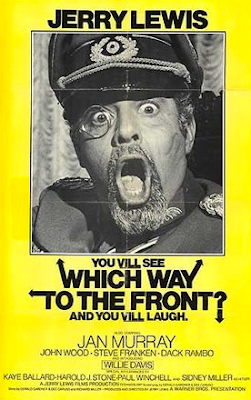 Like many folks my age, I have a kind of love/hate thing for Jerry Lewis movies. There was a time in my youth when I unquestionably cited them as my favorite comedies and yet now it’s rare when any one of them makes me laugh for the right reasons. I admire jerry as a filmmaker, for his work against muscular dystrophy, for his longevity in show business and for his moments of comedic genius. I also find him a boorish, elitist, insulting comedy snob with an annoying real-life personality and an ego the size of a not so small planet!

When it comes to his movies, though, it’s interesting to note that films that were once absolute favorites are now often nightmarishly hard to sit through. One case in point is WHICH WAY TO THE FRONT?. This picture is often cited as Jerry’s worst film (by those who have yet to see his later ones).

Released in 1970, I remember seeing WHICH WAY TO THE FRONT? In theaters when it was new. I remember thinking how cool it was and how handsome and hilarious Jerry was in a slightly different role than his usual nebbish. I watched it again this morning and every step of the way, it was “What were they THINKING!!??”

The script, from a couple of guys best known for their TV sitcoms, is a soft parody of DIRTY DOZEN-style war films which were all the rage in those days. In this case, the world’s richest man (Jerry, of course) is declared 4-F in World War II but wants to serve his country so he takes 3 other 4-F recruits and decides to start his own army to go after Hitler. He adds his butler and his chauffeur (the latter oddly played by pro baseball player Willie Morris) and that’s it. That’s his entire “army.”

There are a bunch of one-off training scenes (including a couple with George Takai) that go straight for lame gags, then a drawn out plot in which Jerry’s character disguised as a Nazi officer meets Hitler (played for inane fun by director and former actor Sidney Miller).

The problem is there is no real plot…just a set-up, some set pieces and a finish. There’s no real character development, either, for Jerry or for his pointlessly annoyed and annoying sidekicks Jan Murray (was he ever funny?), Steve Franken and Dack Rambo.

The best part of the picture for film buffs is the presence of old-time stars who don’t have to do anything other than show up to make one smile…which is good because they have nothing whatsoever to do. Benny Rubin, Joe Besser, Neil Hamilton, Milton Frome, Robert Middleton, and even the great ventriloquist and voice actor Paul Winchell are present along with brief appearances by Kaye Ballard and Kathleen Freeman. 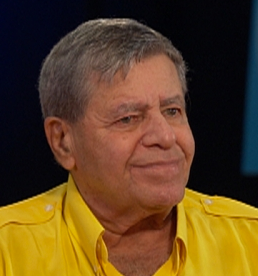 This was, I believe, the film Jerry famously claimed ( and that’s probably all it was) he saw double-billed with DEEP THROAT which made him turn his back on the film industry. In reality, however, he didn’t do that at all. It wasn’t long after this picture that Jerry went into production on what he felt would be his masterpiece, the legendary, unfinished, THE DAY THE CLOWN CRIED. When that film’s production ground to a halt amidst financing and legal problems, he did take a few more years before coming back with HARDLY WORKING. HARDLY WORKING was huge box office throughout Europe but took years to pick up a distributor in the US. When it did, it was recognized not as a masterpiece but as a mess. Other films trickled out, most barely a blip on the radar. Then came Martin Scorcese’s KING OF COMEDY which gained Jerry Lewis a whole new respect in a serious role as a kidnapped celebrity host. Jerry followed that up with a couple of horrendously unfunny French vehicles (with nudity yet!! Thankfully, not Jerry) that really do seem the nadir of his career. As of this writing however, it looks as though the octogenarian actor has yet another independent release in pre-production.

See what I mean…love him or hate him ya just gotta admire a guy that’s been making pictures for more than six decades and just refuses to stop!

Posted by Booksteve at 1:46 PM